The California Institute for Regenerative Medicine (CIRM) is a major funding agency for stem cell research in the Golden State. Since voters approved the establishment of the agency in 2004, the CIRM has spent billions on research and facilities with the aim of making California the stem cell capital of the US. Now, in a move to advance that research mission even further, the agency has announced awards of $32M to investigators and stem cell companies to create a biobank of diseased cell lines for the use of researchers around the world. Called the Human Induced Pluripotent Stem Cell (hiPSC) Initiative Awards, the project will generate and ensure the availability of high quality disease-specific hiPSC resources for disease modeling, target discovery and drug discovery and development for prevalent, genetically complex diseases. 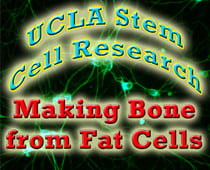 Bone marrow was the first stem cell source to be widely used in clinical transplant surgery to replace damaged bone as a result of injury or chemotherapy. Unfortunately, bone marrow grafts are painful, and the appropriate donor is not always available when the need is there. Now research at the University of California Los Angeles' Broad Center of Regenerative Medicine has demonstrated successfully that stem cells from the patient's own fat (i.e. adipose tissue) can be made usable for bone damage treatment. Bone marrow is, after all, the soft, fatty tissue inside your bones that contains immature cells (aka stem cells) that give rise to all of your blood cells. So looking to fatty tissue from another part of the body to produce mesenchymal cells has made sense all along, though it has taken the efforts of several UCLA teams to show how it can be done in an animal model.

You may know that Biotechnology Calendar, Inc. has been bringing life science researchers and laboratory supply vendors together for 19 years now, but did you know that we began in San Diego with the UCSD Biotechnology Vendor Showcase™ Event?  This showcase is still one of the largest on-campus networking events for scientific research and lab product suppliers.  Each year it draws an enthusiastic annual following of Laboratory product supply companies and top-level research scientists.  This year the Biotechnology Vendor Showcase™ Event at the University of California, San Diego is expected to attract over 700 university scientists who will be there to actively seek new products and services for their life science research programs.

There is still no magic pill for the two-thirds of Americans who are overweight, but research into the cellular mechanism of fat production is turning up promising avenues for therapeutics that are closer than you might think.  We mentioned "good brown fat" in a recent article on hormone research at Harvard.  Scientists in the Diabetes Center and the Department of Cell and Tissue Biology at the University of California San Francisco, Parnassus Campus, are also looking at brown fat production as a treatment for obesity.

The 33rd Semiannual San Diego Biotechnology Vendor Showase™ Event (BVS) at UCSD on February 9th was a success with close to 700 attendees looking at a wide variety of new products. But new products weren't the only thing new at this event, Biotechnology Calendar, Inc. had their very first photo booth available for free fun photo strips to take home!

The San Francisco Biotechnology Vendor Showase™ Event (BVS) at UCSF last Thursday saw sunshine,  a wide variety of research products, and a range of exhibiting companies from Airgas Norpac to EMD Millipore Bioscience Division. And then there were the Science Ninjas....