Last summer we blogged about the lab-on-a-chip flow cytometer invented by University of California Los Angeles bioengineer Aydogan Ozcan and his Biophotonics Lab. Now the Ozcan Group has taken another giant step forward in a larger telepathology project aimed at bringing internet, cell phone, and crowd-sourced resources to the problem of accurately diagnosing disease in developing countries. In a paper by the Ozcan Group with postdoc Sam Mavandadi as lead author, the UCLA engineers report their findings on using a gaming platform called BioGames to challenge ordinary people to diagnose malaria-infected blood cells. While no single non-expert's gaming scores are reliable to make a solid diagnosis, it turns out that the scores of many gamers, when run through a probability algorithm produce a diagnosis comparable to that of an expert.

In combination, the Ozcan Group's cell-phone based microscope could take and transfer blood cell images to a central computer which would translate those images onto the BioGames platform for gamers to read and diagnose. The computer would then process the scores of a large enough sample of gamers and send the results back to the clinic where the patient is being seen by a doctor or nurse. With trained pathologists in short supply in the field and malaria false-positive diagnoses a real problem (and waste of precious resources in treating a titanic global health risk), the combined input from nonspecialists half a world away could save lives--many lives. 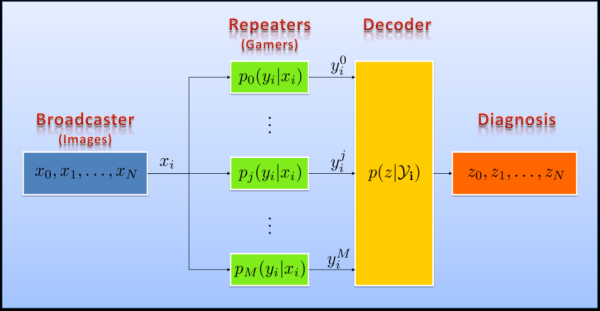 [The math behind BioGames, from the Ozcan Research Group at UCLA Engineering]

We also like the idea of helping others and being actively involved in finding the solution to a real problem, which means we might play this game instead of another one in our spare time. A shortage of gamers probably won't be a problem in mobilizing this telepathology resource; overcoming a bias against nonspecialists and gamers in particular may be. Says Karin Nielsen, a professor of infectious diseases in the department of pediatrics at the Geffen School of Medicine and a co-author of the study soon to be published in PLoS ONE:

"I believe that, similar to other very innovative ideas, one of the major challenges will be the skepticism of traditional microscopists, pathologists and clinical laboratory personnel, not to mention malaria experts, who will initially view with suspicion a gaming approach in malaria diagnostics. It is a very revolutionary proposal and it might take a few clinical studies in the field to document the efficacy of this platform in order to convince traditional microbiologists and other infectious disease colleagues."

It's a brave new world, but what possibilities.

Biotechnology Calendar, Inc. will be on the UCLA campus again this year on October 4, 2012 for our popular semiannual Los Angeles Biotechnology Vendor Showcase™ expo. For information on exhibiting, click below:

Biotechnology Calendar, Inc. is a full service event marketing and planning company producing on-campus, life science research tradeshows nationwide for the past 20 years. We plan and promote each event to bring the best products and services to the best research campuses across the country. Visit our website for information about upcoming shows in your area and to register to exhibit or attend.  Or call to talk to one of our friendly, knowledgeable sales associates.