Since HIV/AIDS emerged as a global health problem in the 1980's, researchers have been diligently working to create new treatments and vaccines for the disease. Currently, there is no cure for the disease, and treatments can only suppress it. Because of its severity and broad reach, scientists around the world receive substantial funding each year to study this virus in order to gain a more thorough understanding and better combat it. Now, thanks to an award from the Foundation for AIDS Research (amfAR), researchers at the University of California, San Francisco will be able to study the virus in a new $20 million institute, located on the Mission Bay campus, for the next five years.
END_OF_DOCUMENT_TOKEN_TO_BE_REPLACED
0 Comments Click here to read/write comments 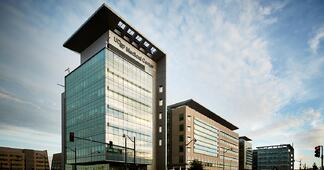 $2.7 Million Given to UCSF Researchers to Reduce Premature Births

The three-year grant will enable a group of UCSF researchers to continue their development of the SMART diaphragm, a wireless device that can detect preterm labor onset sooner and more easily than current methods.

UCSF is Teaming Up With Two Asian Global Companies

The University of California, San Francisco has been actively working on partnerships with several large Asian organizations to accelerate validation and commercialization of promising new technologies for health and disease solutions in 2014.