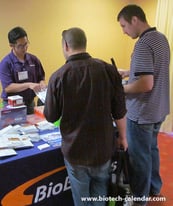 There are many times when putting tarantula toxin into human cells seems like a very bad idea. At the University of California, Davis, however, it is a breakthrough idea that allows for closer examination of the electrical activity in cells, especially neurons. This opens up the field of brain study and also lends insights into conditions like muscle defects, cardiac arrhythmias, and epilepsy.

Remember the character of Pigpen in the comic strip Peanuts? He walked around within a cloud of dust and dirt. Well, according to University of California Davis microbiologist Jonathan Eisen, we all live within our own aura of microbes --10 times as many microbial cells as human cells!--and that's probably a very good thing for our health. It sounds counterintuitive at first, but not all microbes are bad. We've come to realize intestinal biota are good for digestion and colon health (among other things), but the outside of our bodies is also host to vast colonies of microbes that are increasingly proving to be vital cohorts of our immune system.