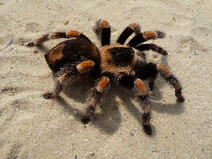 Anyone with arachnophobia will tell you how terrifying spiders are, especially some of the larger ones like tarantulas. One of the biggest fears people report is getting bitten by a poisonous spider. Even though tarantula venom is very weak and not deadly to humans, the thought of getting bitten can cause some people to tremble with fear.

Are you looking to grow your lab product sales revenues for 2015?

Duke University spends hundreds of millions of dollars each year on life science research. Bolstered by NIH funding plus private support from foundations and individuals, Duke University is one of the foremost research institutions in the world. This makes for an ideal marketplace for lab suppliers and vendors to showcase products directly to managers, purchasers, and researchers at this top funded research university.

Fragile X syndrome is a neurodegenerative, genetic disease that causes intellectual, behavioral, and learning challenges. According to the CDC, it is the most common cause of inherited intellectual disability and even though it affects both men and women, it occurs more commonly and more severely in men. There are many other diseases associated with Fragile X, such as autism and epilepsy. Currently, there are no cures for the syndrome, but there are treatments that can help people suffering from the disorder learn some important skills. Emory University researchers have recently received a $9 million grant from the National Institutes of Health to continue their study of Fragile X syndrome and its associated disorders.

Glycans, also known as complex carbohydrates, are essential macromolecules involved in nearly all phsyiological and pathological processes. They cover every living cell in the human body and perform a wide variety of tasks including cellular communication, growth, the spread of many diseases, and are necessary for the organisim's survival. However, there are still many glycans with unknown functions due to a lack of research. With the help of a recently awarded grant from the National Institutes of Health to the University of Georgia Athens, there will soon be more research into the roles of complex carbohydrates.

Duke University recently received $10 million in science research funding from the National Institutes of Health to create an Antibacterial Resistance Leadership Group to conduct research lab investigations into the causes of antibacterial resistance. The new research grant was awarded in fiscal year 2014 to the department of internal medicine at Duke University Schools of Medicine and project leader Dr. Vance Fowler.

Are you looking for top funded lab sales marketplace? Duke University is a multi-million dollar player in the multi-billion dollar life science research marketplace. With $350 million NIH funding in 2013, and $45 million in NSF funding, plus private support from foundations and individuals, this is a large and growing market for lab supply companies looking to expand their reach. Duke’s funding compares favorably to that of Harvard University, which had $352 million from NIH funding and $55 million NSF funding respectively.