Much of the technology being developed for use in first response comes from research funded by the Department of Defense for military applications in the field. That's true of materials bioscience research into advanced wound dressings known as bio-bandages or biomimetic materials, which not only protect a wound from contamination and blood loss but speed up recovery with infused biologic compounds that do things like stop bleeding, actively attack infection, and promote regrowth of healthy cells. In a disaster situation, dressings like these save lives when the nearest hospital isn't near enough. 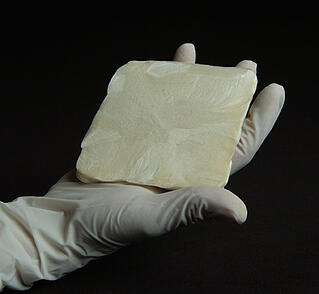 [A popular biomaterials dressing developed at the University of Washington, image courtesy of Northwest Science and Technology Magazine]

Colorado State University, Ft. Collins' Dr. Melissa Reynolds is a chemist and materials scientist who leads a diverse lab with members from the Departments of Chemistry, Biology, Biomedical Sciences, and the School of Biomedical Engineering. With support from a major DoD grant, the Reynolds Lab is hard at work developing high-tech dressings with projects exploring molecular, polymer, and extended framework biomaterials, as well as testing those materials for safety and viability.

A microscope isn't likely to be the first thing you reach for in the immediate aftermath of a hurricane or earthquake, but it's going to be vital if the disaster you're responding to is an outbreak of disease. Additionally, recovery efforts may involve restoring potable water to an area, which means monitoring water bioactivity for contaminants. Because microscopes are high-dollar items and not especially portable, researchers in fields like biophotonics have been exploring the hand-held world of lab-on-a-chip technology, which promises accurate and inexpensive diagnostic equipment that is usable in the field.

At least twice we've had the opportunity to report on the research of UCLA Nano-Bio Photonics wunderkind (he just turned 34) Dr. Aydogan Ozcan. A bioengineer with an extremely active and high-profile lab, he initially gained fame for succeeding in turning a common cell phone into a microscope (later a cytometer) with the addition of a part that costs about $5 to make. As he puts it on his lab group homepage: In a nutshell, through innovation we aim to create photonics based telemedicine technologies toward next generation smart global health systems.

Watch this recent video for an overview of the astounding work being done by these UCLA pioneers whose solutions are always predicated on being usable in more remote, poorer, or emergency locales:

Our Ozcan Nano-Bio Photonics blogs include:

The power source for that lab-on-a-chip cell phone might one day be a fine polymer film over the phone's face with the capability of harnessing solar energy, if another busy UCLA lab brings their research to market. Read: Polymer Solar Cell Research Breakthrough at California NanoSystems Institute, UCLA. Solar technologies more broadly offer a solution to problems faced in both resource-poor areas, remote clinics and hospitals, and during power outages in our own cities and towns.

Once a biological threat has been identified, say in a water source, how will recovery efforts of the future address that problem? Possibly utilizing a waste decontamination system that relies on genetically-developed superbugs that not ony eat the bad stuff, but produce energy while they're at it. Such is the research of University of Cincinnati molecular geneticist Daniel Hassett, whose work we reported on in a blog last June: Cincinnati Bioscience Research Creates Superbugs to Eat Waste, Produce Energy. The "Bacto-Bots" Hassett's company produces carry out their task of turning waste (and other microorganisms) into dinner through an electrogenic bioreactor (EBR) platform, which the company, Pilus Energy, asserts could produce enough energy from the wastewater collected from one village to power a small clinic. The system was designed to be compact initially, but could be built on a larger scale as well. 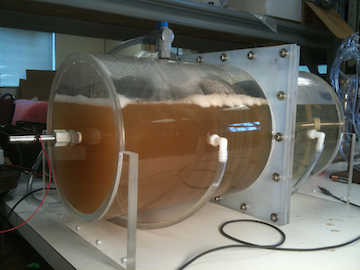 [Bioreactor prototype with Bacto-Bots at work, courtesy of Pilus Energy]

To return to that first responder situation, it's a rule in emergency response that you do not put further people in harm (such as rescuers themselves) when you are assessing how to engage resources either during or after an event. In the case of an unstable building or a potential chemical hazard, human lives can be protected by sending in mechanical robots outfitted with cameras and sensors of other kinds. University of Minnesota robotics engineer Nikolaos Papanikolopoulos developed just such a tool, and named it Scout. Scout and its sibling Throwbots (see below) are produced by a company started with this UM technology and already furnishing police departments, swat team, and rescue personnel with these proxies-in-danger.

[When it isn't safe to enter that building, send in the Throwbot instead, courtesy of Recon Robotics, based on UM technology]

Much life science research success involves taking the long view, especially with basic science research, which can be very hard to evaluate on a timeline for translation into tangible results. Results both longterm and realtime in the form of scientific solutions do come, though, and as always we're proud of our scientists as well as our first responders, medical doctors, and clean-up crews when disaster strikes.

Biotechnology Calendar, Inc. is in the business of bringing life science researchers together with scientific sales professionals to network and exchange valuable information about laboratory research and the tools and techniques for getting it done well. Now in our 20th year of scientific event planning and marketing on research campuses across the US, we're looking forward to our 2013 shows on the campuses referenced in this article: