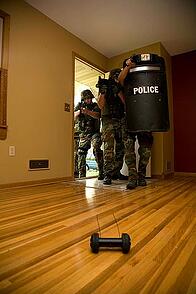 The NSF is the lead agency in the NRI, with NASA, the NIH, and the USDA jointly committing $70M to fundamental and translational research into the creation of next-generation robots.  Some of the things these augmentative machines already do are: 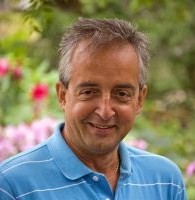 This last technology, for visual recon in the public safety sector, is the focus of research by faculty and students at the Center for Distributed Robotics at the University of Minnesota, Twin Cities.  Led by computer scientist and engineering professor Nikolaos Papanikolopoulos (whose NSF funding totals almost $4M in new grants since August 2010), UMN robot scientists have already produced and marketed the Scout (seen in the photo above) through their company ReconRobotics.

The Scout, in all of its variations, is a "Throwbot," meaning it weighs about a pound and is sturdy enough to be tossed around: over walls, through windows, down staircases, or into enemy territory.  It's mobile, rolling around on two wheels, and it houses a video camera that transmits real time images to its operator on a hand-held unit, even in the dark, using its infrared optical system.  Watch videos of the Scout and its cousins here, at the NSF's Engineers of the New Millennium Special Report.

In development currently at Minnesota's Center for Distributed Robotics are machines similar to the Scout, but with added talents like climbing stairs (the Loper, left); tumbling around (the Adelopod, right); and playing follow-the-leader with other robots, allowing simpler secondary units to take directional cues from a primary robot managed by a human operator.  (Photos courtesy of NSF.)

The future is already here, in some respects.  Robots vacuum our carpets while we're at work, our cars park themselves and know if we're falling asleep at the wheel.  Bionic limbs are a reality.  Buildings self-adjust to changes in the weather.  Five years from now newer technologies will be possible and will be demanded by the world market.  If science funding continues to be a priority with the next administration, America will be at the front of the line to offer up tomorrow's robotic systems and a new generation of operators who think robots are far more cool (and helpful) than threatening.

Next up: robot shape-shifters at MIT.

If you are a research professional interested in attending our Twin Cities vendor shows you can register today for these events.

For science supply companies interested in exhibiting at either or both of these events (there's a waiting list for St. Paul), vendor show information and university funding statistics are available when you click on the buttons below.