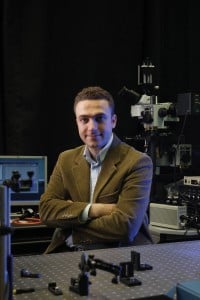 "We have more than 5 billion cell phone subscribers around the world today, and because of this, cell phones can now play a central role in telemedicine applications.  Our research group has already created a very nice set of tools, including cell phone microscopes, that can potentially replace most of the advanced instruments used currently in laboratories."

The latest marvel to come out of the Ozcan Photonics Lab is a flow cytometer that attaches to a cell phone and costs about $5 to produce.  The device attachment is an "optofluidic platform that integrates imaging cytometry and florescent microscopy," according to a recent UCLA Newsroom article, and "can be used to rapidly image bodily fluids for cell counts or cell analysis."  The key to the device's overall function is the camera lens on the phone and the phone's ability to store images on its CMOS sensor-chip.  Use of the resulting cytometer does not require cell phone service or a satellite connection at the point of usage, though presumably with such a connection a specialist or doctor at a different geographic location could analyze the sample, either in real time or when a connection became available. 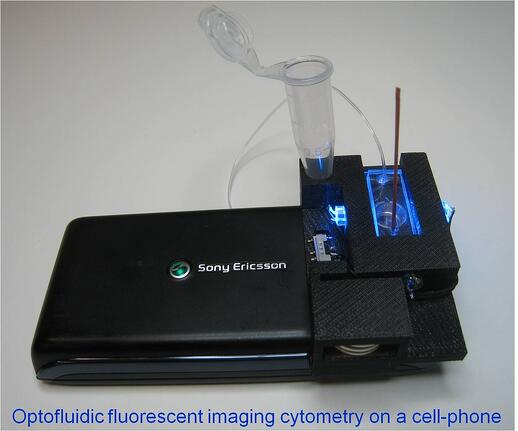 (Above image courtesy of UCLA)

The "telemedicine applications" Dr. Ozcan refers to include a cell-phone-attached microscope called LUCAS that his lab debuted in 2009, and the benefits of which he describes in this video:

LUCAS from SecondMuse on Vimeo

LUCAS was chosen to grace the cover of Lab-on-a-Chip Journal and is an excellent example of what can be accomplished through a reduction in size, complexity, and cost of analytical equipment.  Lab-on-a-chip (or LOC) technology can offer all of these advantages over traditional machinery:

The term disruptive technology is popular now as a way of describing an invention that does something that was formerly impossible or unknown, thereby replacing and making obsolete the previous technology.  It's not a given that LOC inventions like Dr. Ozcan's cytometer and microscope will become the industry or laboratory standards.  Where they will be absolutely revolutionary is in the field, the clinic, and the developing world where there is currently no comparable tool.

Biotechnology Calendar, Inc. is a full service event marketing and planning company producing on-campus, life science research tradeshows nationwide for the past 18 years. We plan and promote each event to bring the best products and services to the best research campuses across the country.  Visit our website for information about upcoming shows in your area.

One of our biggest events, held bi-annually on the UCLA campus, is the Los Angeles Biotechnology Vendor Showcase™ Exposition.  Plan to attend this year on October 6.