Currently, wastewater treatment systems utilize bacterial microorganisms to eat suspended waste in the secondary phase of treatment, but no energy is derived from that process. Later on, in the tertiary treatment phase, methane gas may be produced as a form of energy when solids are dried (and then used as fertilizers). With Hassett's superbugs, which are also known as "BactoBots" when marketed by Colorado-based company Pilus Energy, the household or industrial waste stream is put through a superbug filter wherein the bonds of energy stored in that waste are released in the form of electricity while the water is also purified. That electricity is stored in an ultrasupercapacitor for use later on. Hydrogen gas is also produced for either immediate energy use or storage. Watch Pilus' video on the superbug cell process for a visual understanding of the unique procedure:

In testing the superbugs in their lab recently, Hassett and co-researcher Bob Voorhees made a surprise discovery that compounded the efficiency of the system yet again. They found a secondary bacteria working on the waste matter after the BactoBots had done their work. Instead of having the system shut down when the superbugs completed their activity, the system continued to produce energy for some 4 days more, making a good thing even better. 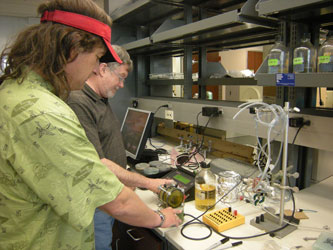 A trial of the Pilus BactoBot machinery is about to be conducted by Anheuser-Busch in California at one of their distilleries. Their primary interest is in using less energy on water purification. In other parts of the world, the unique bioscience research system might be installed in a rural village to remove pathogens from the waste stream while generating energy to power a small clinic. The superbugs have been designed to be superefficient, but they also are notable for what they don't do, namely:

In a second bioscience research project being conducted by Pilus, superbugs are being designed that would eat cancerous tumors. With Dr. Hassett's work on cystic fibrosis, we begin to see the vaste potential of genetic bioengineering in both treating disease and living in a greener world. The BactoBot system is, in fact, an example the optimized bioremediation that Daniel Schneider of UIUC described in his book Hybrid Nature, which we reported on in an earlier blog on water treatment advances.

This post has been brought to you by Biotechnology Calendar, Inc.  a full-service event marketing and planning company which produces on-campus life science research tradeshows nationwide for 20 years. We plan and promote each event to bring the best products and services to the best research campuses across the country. Life science researchers, purchasing agents, and lab managers are actively invited to attend to see the latest products and equipment and discuss their laboratory tool and service needs.  Plan on attending Biotechnology Calendar, Inc.'s BioResearch Product Faire™ at the University of Cincinnati Campus on August 1, 2012.

See our nationwide show schedule for 2012.