According to the CDC, Every 4 minutes, someone in the United States dies of stroke. That’s 140,000 Americans killed by stokes each year. Stroke is a leading cause of serious long-term disability and costs the United States an estimated $34 billion each year.

To help find new treatment options for the nearly 800,000 people who have stokes each year, a team of scientists at The University of Georgia, Athens have developed a new livestock model  that could speed stroke discoveries by providing a better, more predictive transnational model.

Mice are out and pigs are in:

(comparison of the brain of a mouse, a pig and a human)

Unfortunately, therapies that worked on small animals such as mice have often proven ineffective in human stroke. Hundreds potential therapeutics designed to mitigate the damage caused by strokes have failed clinical trials. In fact, there iscurrently only FDA approved agent for treating strokes, tPA. It must be administered within three hours of the event and is only beneficial for strokes caused by a clot. Only 5% of stroke patients receive the tPA.

One possible explanation for the success in developing treatments is the unrelaibility of using mouse models for pre-clinical studies. On the other hand, pigs are often referred to by scientists as “the animals most like people.” The brains of pigs share certain physiological and anatomical similarities with that of human brains. Researchers at UGA’s Regenerative Bioscience Center recently developed the first U.S. pig model for stroke treatments. This new model will provide essential preclinical data and increase the speed of the drug discovery process.

"Compared to mice, our large animal stroke model is a more rigorous test of potential therapeutics with findings that are likely more clinically relevant," said Franklin West, an associate professor at UGA’s College of Agricultural and Environmental Sciences.

Emily Baker, lead author of the study, went on to explain in the same article for UGA Today,  "This is the first time that a neural stem cell therapy has been tested in a large animal model with a brain more similar to humans. With greater predictive capabilities, there's a better likelihood of it working in a human."

What Researchers have learned from the new model:

Using their model, the team’s study demonstrated that induced neural stem cells can replace stroke-damaged brain tissue and stimulate neuroplasticity-the brain's ability to naturally repair itself. Additionally, the research team was able to more precisely establish the repair mechanism by which stem cells work in neural tissue regeneration and neuroprotection.

The team's work shows improved recovery in white matter, the "superhighways of connectivity" that connect key centers of the brain. "From the MRI we learned of a recovery mechanism in that neural stem cell therapy improves white matter integrity," said Baker. "We now have white matter tracts that allows for faster, more effective communication from one region in the brain to another after injury."

"The takeaway from this work is that the injected stem cells led to cellular and tissue improvement," West said. "Basically, if you have a stroke and you get this treatment, fewer neurons are going to die, and for stroke research that's critically important."

This research has been supported by over a million dollars from the National Institute of Health. So far in 2017, UGA has received 116 awards, totaling over $45 million in research funding from the NIH.

Researchers at UGA to Meet with Lab Suppliers at Bioresearch Product Faire:

Ground breaking research like that happening at AGA's Regenerative Bioscience Center, requires access to the latest in scientific equipment. Those wishing to increase their laboratory product sales in the coming years should plan on  attending  The 19th Annual BioResearch Product Faire™ at the University of Georgia on March 14th, 2018. This is a great opportunity for laboratory equipment suppliers to display their products and meet face to face with the well funded researchers at UGA to discuss their needs.

For more information about displaying and demonstrating lab or chemical supply products at this event call (530) 272-6675 or click the link below . 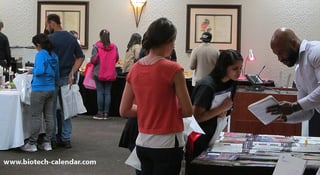 Life science professionals attend for free. Click the button below for additional information or to pre-register.