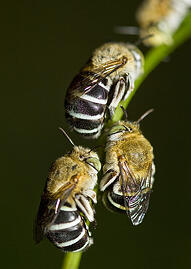 The majority of today’s HIV-fighting drugs attempt to stop the virus from reproducing. This seems like an intuitive and practical approach, but it has two major pitfalls: one, it is entirely useless at preventing infection in the first place; and two, HIV is adaptable and can devise new ways to replicate or reproduce, thus sidestepping the drug’s purpose. Washington University researcher Dr. Joshua Hood believes that WUSTL’s new solution addresses both of those issues in one fell swoop: the nanoparticle targets the essential membrane of the virus, and in so doing directly kills the virus on contact.

“We are attacking an inherent physical property of HIV,” Hood explains. “Theoretically, there isn’t any way for the virus to adapt to that. The virus has to have a protective coat, a double-layered membrane that covers the virus.”

In other words, the nanoparticle seems to have HIV evolutionarily cornered.

The toxin that Hood and his fellow researchers are borrowing from their bee donors is called melittin. Melittin stabs the membranes of viruses like HIV, like a bee stinger on a cellular scale. The compromise of the virus’ protective shields causes them to die out almost instantly. As one might imagine, allowing melittin to run rampant in the body is a potentially fatal decision, as several important components of the body react similarly poorly when their membranes are stabbed.

To prevent instances of such unfortunate cell death, the nanoparticles in question are equipped with a ring of protective bumpers. The average cell, which is several times larger than a virus, bounces right off of the bumpers and so is completely unharmed. HIV, on the other hand, slips between the cracks and meets its demise at the hands of the melittin. In this way, the nanoparticles “target” viruses without disrupting normal cell functions.

Due to the potency and accuracy of the Washington University nanoparticles, they can be used preventatively and therapeutically. The lab currently applies them in the form of a topical gel, which kills HIV on contact and thus before infection. However, Hood sees potential for an injection, which could be used to fight existing HIV infections. In addition, the fact that the nanoparticles target based on size means that they can also be used to fight similar viruses. From a recent WUSTL article: “Since melittin attacks double-layered membranes indiscriminately, this concept is not limited to HIV. Many viruses, including hepatitis B and C, rely on the same kind of protective envelope and would be vulnerable to melittin-loaded nanoparticles.”

Biotechnology Calendar, Inc. will be on the Washington University campus next on May 23rd, 2013 for our St. Louis BioResearch Product Faire™ event. This show is an excellent opportunity for life science scientists and laboratory equipment suppliers to network and discuss their research needs and solutions. To see our 2013 show schedule, click here. To attend the St. Louis BioResearch Product Faire™ specifically, click this button: