[Chrysta is a healthy Rhesus macaque in the Mitalipov Lab, courtesy of their flickr page]

Dr. Shoukhrat Mitalipov, Ph.D., is a scientist in the Division of Reproductive & Developmental Sciences at ONPRC (primate research center), Oregon Stem Cell Center and OHSU School of Medicine departments of Obstetrics and Gynecology and Molecular and Medical Genetics. It is his work, in collaboration with Dr. Paula Amato, M.D., associate professor of obstetrics and gynecology in the OHSU Center for Women’s Health, that is producing these promising results for women faced with inherited mitochondrial disorders that they are virtually certain to pass on to their children. Dr. Mitalipov thinks this gene therapy could be ready for clinical application in as few as three years. His lab work in this area takes place in a non-federally-funded lab that is entirely separate from his NIH-funded work. The grey area has to do with possibly destroying human embryos that they might create. They hope in future to secure federal funding when there is no chance of damaging viable human material--because it will be used to produce a healthy, wanted child by the parents. 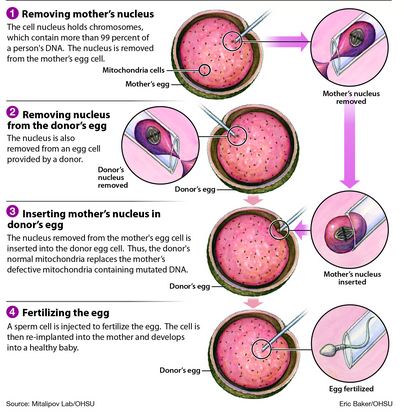 [How the mitochondrial swap happens, courtesy of OHSU]

The obstacles to this gene swapping treatment are at both the research end (how to test the procedure in humans) and involve ethical questions. Some fear that any kind of DNA manipulation at the pre-embryonic stage will lead to customized kids some time in the future. Others wonder what the status of a child with three parents' DNA will be--though technically the mitochondria only contributes 37 genes, so the child would have a very tiny percentage of the second woman's DNA. Scientists and public officials are debating the issue in England right now as well, as a similar research technology there is poised for public access as a treatment to prevent mitochondrial diseases if it passes safety and ethics tests, which it looks as though it may. Some of the disorders that can be passed on through the mother's mitochondrial DNA include:

Biotechnology Calendar, Inc. is in the business of bringing life science researchers together with scientific sales professionals to network and exchange valuable information about laboratory research and the latest tools and techniques for getting it done optimally. Now going into our 21th year of scientific event planning and marketing on research campuses across the US, we're looking forward to our next (11th annual) Portland BioResearch Product Faire Front Line show on the OHSU campus, to be held on September 12, 2013.