According to Dr. Lieber (in an interview for HarvardScience):

"With this technology, for the first time, we can work at the same scale as the unit of biological system without interrupting it. Ultimately, this is about merging tissue with electronics in a way that it becomes difficult to determine where the tissue ends and the electronics begin.” 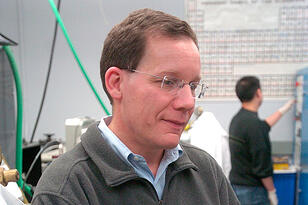 “In the body, the autonomic nervous system keeps track of pH, chemistry, oxygen, and other factors, and triggers responses as neededl. We need to be able to mimic the kind of intrinsic feedback loops the body has evolved in order to maintain fine control at the cellular and tissue level.”

[Image of Bozhi Tian by Michael Gillette, courtesy of MIT]

The overlapping of organic and inorganic (or biologic and non-biologic) seems to headline the science news increasingly often these days, including in this blog. Perhaps it's the surprise value, though in another few years we may be so used to bioengineered cells and biocompatible electronics that they won't cause us to do a doubletake or wonder about just what constitutes life. Cybernetic organisms (cyborgs) were fantastical creations when the term was coined decades ago, and they mainly appeared in cautionary science fiction with suped-up heroes or villains. In reality, the interface of mechanical and biological is largely happening at the nanoscale (which sounds like an oxymoron), and though militaries around the world are interested in applications for the new technologies, it'll probably look less like Ironman and more like a familiar but healthier version of our old fashioned bodies.

Other bio-crossover Science Market Update blogs you may be interested in reading:

Biotechnology Calendar, Inc. will be on the Harvard Medical School campus next on February 21, 2013 for our 7th Annual Boston BioResearch Product Faire event.  With life sciences researchers from Harvard Medical, Dana-Farber, Joslin Diabetes, Children's Hospital, MGH and other institutions in the Longwood medical neighborhood attending, this is an excellent opportunity for scientists and laboratory equipment suppliers to network and discuss their research needs and solutions.

To see our 2013 show schedule, click here. For a funding report and info on the Boston show specifically, click the button: