In brief, 3D bio printing theoretically would build up a functional, living organ through a series of fine layers of cells and their support structures. The organ could be produced to the exact specifications of an individual using cells that his or her body would not reject. It sounds like future shock, but bioengineers are getting closer to realizing this bit of not so fictional science. Thin layers of tissue can already be produced with living cells.

One key problem that has beset bio printing scientists on larger structures has been the vascular system that brings blood and oxygen to all of the cells in an organ. This very delicate and pervasive system has proven difficult to reproduce, and without it, cells especially on the inside of an organ cannot breath and die off. The challenge has been how to create blank space for the vascular plumbing when it is so fine. The solution Penn bioengineers came up with uses a technique similar to the "lost-wax" casting method for sculpture (which is another type of 3D imaging).

To create space for a blood vessel network using a lost-wax-type process (where the material creating the structure would later be dissolved), Penn scientists experimented with different substances that would be sturdy enough to support the cell solution while it grew around the future blood vessels, as well as being simple and nontoxic to dissolve with water later on. The answer: sugar. 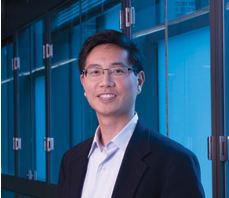 In experiments printing vascular networks out of a viscous sugar solution and seeding them with cells, researchers found that the sugar matrix was in fact strong enough to maintain its shape (and even to weather transport to other labs in other cities). When they flushed out the sugar at a later stage and ran a blood solution through the emergent "veins" the interior cells were fed, oxygenated, and remained alive.

This elegant research project was conducted by a team led by postdoc Jordan S. Miller and Professor Christopher S. Chen (right) of the Department of Bioengineering at Penn, with colleagues Sangeeta N. Bhatia of MIT and her lab postdoc Kelly R. Stevens. Dr. Chen says in a press release:

“This new platform technology, from the cell’s perspective, makes tissue formation a gentle and quick journey, because cells are only exposed to a few minutes of manual pipetting and a single step of being poured into the molds before getting nourished by our vascular network.”