Texas Medical Center Researchers Closer to Cause of Huntington's

Researchers at Texas Medical Center’s Rice University recently discovered that Huntington’s Disease might be triggered by a repeating nucleotide sequence in the gene for a mutant protein. The research team conducted this study by analyzing proteins that were suspected to misfold and form plaques in the brains of patients with neurological diseases.

Huntington’s disease (HD) is a fatal genetic disorder that has no cure and often strikes during the prime working years of a person’s life. It causes the progressive breakdown of nerve cells in the brain and deteriorates the person’s physical and mental abilities. Every child of a parent with HD has a 50/50 chance of carrying the faulty gene. According to Huntington Disease Society of America, approximately 30,000 Americans have the disease, and more than 200,000 Americans are at-risk of inheriting it.

The TMC study, led by Rice bioscientist Peter Wolynes, appeared in the Journal of the American Chemical Society. Among other significant findings, this study confirmed previous results by other labs that showed the length of repeating polyglutamine sequences contained in proteins is critical to the onset of Huntington’s disease.

What is polyglutamine and role does it play in Huntington’s Disease?

Glutamine is an amino acid that is used in the synthesis of proteins. Repeating glutamines, called polyglutamines, are normal in huntingtin proteins. However, when the DNA is copied incorrectly, the repeating sequence of glutamines can become too long. This can result in diseases such Huntington’s. Furthermore, the number of repeat glutamines can increase with each generation. A healthy parent whose huntingtin gene encodes proteins with 35 repeats may produce a child with 36 repeats and a person with the longer repeat is more likely to develop Huntington’s disease.

Aggregation, which refers to the accumulation and clumping together of proteins, usually begins only once the polyglutamine chains reach a length of 36 repeats. Longer chains are linked with an earlier onset and worse symptoms. 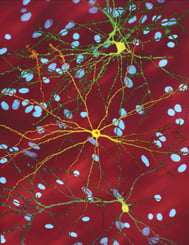 (Image of neuron with aggregations courtesy of Wikimedia Commons)

Previous experiments had shown that sequences of 20 or less repeats didn’t fold and only clumped into a nucleous when there are four or more of them in close proximity. However, sequences with 30 or more repeats can fold by themselves and become the building blocks for troublesome aggregates. So even a single protein can begin the accumulation and clumping process if the repeated sequence is long enough.

Dr. Wolynes and his team aimed to learn how the length of repeats influences aggregate formation by studing polyglutaimine chains with between 20 and 50 repeats. They found that at intermediate lengths between 20 and 30 repeats, polyglutamine sequences can develop a straight or a hairpin configuration. While longer and shorter sequences form aligned fiber bundles, simulations showed intermediate sequences are more likely to form disordered, branched structures.

“We don’t know if branching is good or bad,” Wolynes said. “But it explains the weird shapes the experimentalists get in the test tube.”

What was clear in the simulations was that polyglutamine sequences that remained unfolded do not accumulate clumps as often. “What’s ironic is that while Huntington’s has been classified as a misfolding disease, it seems to happen because the protein, in the bad case of longer repeats, carries out an extra folding process that it wasn’t supposed to be doing,” Wolynes said in an article for TMC News. It is hoped that this new understanding of the disease's cause will bring researchers closer to finding treatment options or possibly a cure in the near future.

TMC is the largest medical complex in the world. It is home to the world’s largest children’s hospital and cancer hospital. The campus encompasses 50 million developed square feet. It employs over 100,000 people and currently has $3 billion in construction projects underway.

Life science researchers at TMC are involved in numerous investigative studies. To conduct their cutting edge research they need the best and newest laboratory tools and technologies. On Thursday, January 26, 2017 life science researchers in the Houston area are invited to attend the 17th annual BioResearch Product Faire™ at the Texas Medical Center to view the latest in lab technology.

This event gives lab suppliers the opportunity to meet with over 450 active life scientists and increase their scientific sales in 2017. Lab or chemical supply companies interested in displaying and demonstrating their lab products can call (530) 272-6675 or click the link below for more information.