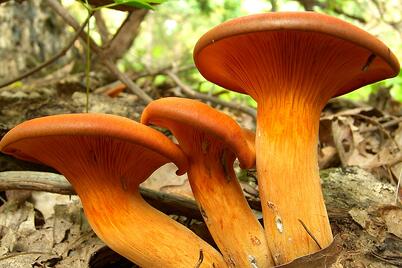 One particular specimen the Minnesota lab is experimenting with is the “Jack O’ Lantern” mushroom (above, courtesy of Wikimedia Commons and Jason Hollinger) which is known for its antimicrobial and anti-inflammatory compounds. Not only did the Schmidt-Dannert lab sequence the fungus’ genome, but they also learned how it produces these compounds. From there, the lab is trying to use that information to bolster production of those compounds, possibly in such solar-powered cells as mentioned above. Says Schmidt-Dannert in a University of Minnesota researcher spotlight:

“The goal is to introduce biosynthetic functionalities taken from mushrooms into genetically engineerable microorganisms such as E. coli or yeasts…My hope is to design microbial cells to become little factories.”

This is especially useful when it comes to the Jack O’ Lantern mushroom, whose compounds are used to fight cancer and malaria. The Schmidt-Dannert lab (below, courtesy of U of M) makes these compounds more available and easy to produce, while better understanding the fungus from which they came. This should aid in both the development and discovery of new drugs.

Professor Schmidt-Dannert combines organelles and microorganisms into one organism, which allows her to create new enzymes and compounds efficiently and effectively. These have several applications, and are valuable as antioxidants, colorants, and aroma compounds, for example. By understanding what compounds have what effect, how these compounds are produced, and how to produce these compounds in laboratory organisms, Schmidt-Dannert envisions “a synthetic biology/ecology processing toolkit that can be used to aid the design of futuristic biorefineries.” Such a toolkit would allow biologists to more easily work as engineers, creating organisms based on the output needs.

Research in the field of biotechnology such as Professor Schmindt-Dannert’s is just the beginning at the University of Minnesota, where the biochemistry major is the largest departmentally based major in the College of Biological Sciences. To read more about the U of M, including research and funding statistics, see our report below:

Biotechnology Calendar, Inc. will be returning to the University of Minnesota this year for both the Minneapolis BioResearch Product Faire™ and the  St. Paul BioResearch Product Faire™. Biotechnology Calendar is a full service event company that has produced on-campus, life science research trade shows nationwide for the past 20 years. We plan and promote each event to bring the best products and services to the finest research campuses across the country. If you are a university researcher or a laboratory product vendor, consider attending one of our on-campus trade shows: here is our 2013 schedule.