Rapa Nui is the indigenous name for Easter Island, where the original soil samples containing the bacterium that became rapamycin (sirolimus) were found by Brazilian scientists in 1965. After years of research, the American drug company Wyeth had its rapamycin drug Rapamune approved by the FDA for use in transplant surgery. Wyeth was bought by Pfizer in 2009. Other research into the uses for this potential wonder drug have continued, though, especially at UTHSC. Five of the major UTHSC investigators involved in rapamycin drug research were on hand to celebrate Rapamycin Holdings' recent movement forward (see photo below), along with the company's new chief research officer. 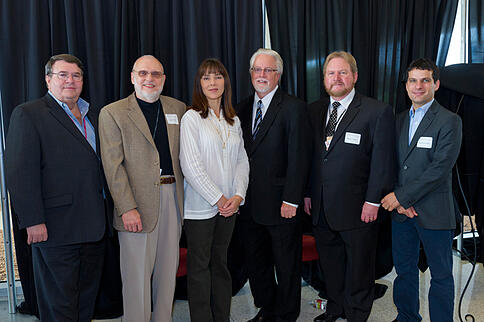 Dr. Arlan Richardson is the founding director of the Barshop Institute for Longevity and Aging Studies and a professor of cellular and structural biology. (His lab received $1.08M in NIH funding through the NIA in 2012, plus a grant from the Veteran's Administration for research.)

Dr. Z. Dave Sharp is a professor of molecular medicine at UTHSC. In 2009 he received the Mprize Lifespan Achievement Award from the Methuselah Foundation for his pioneering research into the effect of rapamycin on aging in mice.

Dr. Veronica Galvan is an assistant professor of physiology at the Barshop Institute.

Dr. Randy Strong is a professor of pharmacology in the School of Medicine at UTHSC. It was his research that, when published in 2009, broke to the world the full potential of rapamycin.

Dr. Salvatore Otto is also an as assistant professor of physiology and works with Dr. Galvan on rapamycin's potential for restoring memory in Alzheimer's patients.

For a look at just what these researchers are doing at the Barshop Institute in their rapamycin research, watch the UTHSC video below.

[Rapamycin research at the Barshop Institute at UTHSCSA]

Biotechnology Calendar Inc. will hold its 11th Annual San Antonio BioResearch Product Faire™ event on the UTHSC campus on September 19, 2013. For information on exhibiting, click the button below:

Biotechnology Calendar, Inc. is a full-service event marketing and planning company producing on-campus life science research tradeshows nationwide for over 20 years. We plan and promote each event to bring the best products and services to the best research campuses across the country. Life science researchers, purchasing agents, and lab managers are actively invited to attend to see the latest products and equipment and discuss their laboratory tool and service needs. See our nationwide show schedule for 2013.