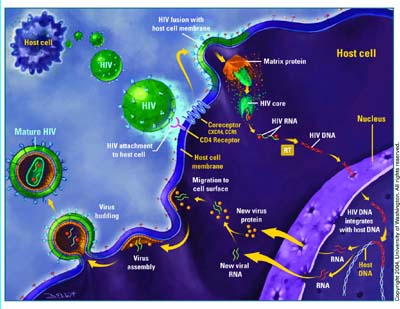 The NIH just moved us one step closer to a cure for AIDS with a new $21.8M grant to continue research at the Sundquist Lab at the University of Utah. According to Ravi Basavappa, a program director for the NIH, the continued funding reflects the NIH's prioritizing of AIDS research because "HIV is extremely adept at evolving resistance against therapeutics that target individual HIV proteins ... The research ... is to understand in detail how the virus interacts with components of the cell could provide a framework for developing entirely new classes of therapeutics."

So why does HIV continue to have this priority designation today, when it seems we have stopped dying from it in the U.S.? The virus used to be a virtual death sentence, but now with a strict multi-drug regiment, it can be managed, but not entirely cured. Part of the problem is that once you have it you have it, you have it for life like chicken pox or herpes. In fact, despite all the research there are no commercially vaccines available today, the only way to avoid HIV is to focus on prevention.

The real problem is that HIV has spread like wildfire globally, with approximately 34 million people living infected with the disease. In fact, more than 2.7 million people were newly diagnosed with either AIDS or HIV  in 2010. And if that isn't frightening enough, the CDC estimates that 1.8 million of the infected will die. Despite some successful intervention in the US, HIV has become a worldwide epidemic where access to life saving drugs is extremely costly and very scarce in poor areas, and it is not under complete control in the US.

In the US, the CDC estimates that approximately 800,000 people are currently living with HIV or AIDS . Despite, public awarness of the HIV threat, more than 50,000 people will be diagnosed positively for it each year, with the highest rate of infection (61%) among gay and bisexual males. Even more staggering is that a person is still 8 times more likely to become infected if he or she is African American than if white. It seems that the HIV infections rates follow the population of the United States with highest rates of infection seen in the big cities. There are some exceptions, with the south having the highest infection rate in the U.S. (with 428-3,365 infection per 100,000 people). Despite the availability of life saving drugs, it is expected that 21,000 people will die from HIV or AIDS in the US in this year alone.

It seems that HIV has a very high cost of living when a monthly regiment of HIV/Aids drugs can cost between $2,000 to $5,000. This means that one person can spend half a million dollars just trying to stay alive. In fact, this year it will cost the U.S. almost $15 billion to treat people who how have HIV and AID's. But $15 billion is just a starting point for the future costs with the current infection rates and the increasing life expantancy of people with HIV/Aids. So, with upward spiraling costs the sooner an inexpensive vaccine and drugs are developed the better it is for all of us.

This new NIH grant, for Dr. Wesley I. Sundquist at the University of Utah builds upon a previous $19 million dollar grant from the NIH in 2007. The initial grant (which has now been extended) was for tracking the structural and signaling changes during the HIV life cycle through HIV/Host interactions. Using high resolution imaging, the lab will continue to map how the virus moves into a cell, through the cell, out of a cell (virus budding), and onto the next cell during its life cycle. In particular, the research focuses on how HIV uses budding to escape the cell and host defenses.

Dr. Sundquist explains the importance of his lab's research, saying:

“Viruses are parasites, meaning they have to use cellular mechanisms to thrive. Our goal is to understand how HIV uses the host cell and then to see that knowledge translated into therapies.”

The Sundquist Lab is using a wide variety of techniques, such as NMR, EM, and crystallographic studies of viral complexes, biochemical analyses of the interactions between viral components and their cellular partners, and genetic analyses of viral protein functions.

The previous grant enabled the Sundquist Lab to partly determine how HIV viruses leave cells through the human cellular ESCRT pathway. In human cells, vesicles are made by the ESCRT pathway to move material into the multivesicular body (MVB), a late endosomal compartment. HIV works by hijacking the ESCERT pathway to escape the plasma membrane through virus budding. So far 2 proteins have been found that bind HIV, but the ESCRT pathway is very complicated and has over 30 proteins. With the help of the Chris Hill Lab, 12 of those proteins and structures are now known.

The new grant will allow the Sundquist Lab to continue it's research on the ESCRT pathway. According to Sakalian,

“The new phase of funding will enable the center’s outstanding virologists and structural biologists to continue pushing the envelope of our understanding of host-viral interactions at the molecular level and providing detailed information that is critical for developing next-generation HIV therapeutics.”

The Sundquist lab is located in the Department of Biochemistry  in the E.E. Jones Medical Science Building. The Department of Biochemistry is committed to research and currently has 26 laboratories working at the molecular level to characterize macromolecules and biological processes. The E.E. Jones Medical Science Building, opened in 2005, is the center of research for the School of Medicine and also houses the Department of Pathology and Biochemisty. The facility has 6 levels, 125,000 square feet and is located on the Health Science Center campus.

If you are interested in reading more about AIDS research in our Science Market Update blogs:

Biotechnology Calendar, Inc. will be in the Utah capitol to hold our 13th Annual Salt Lake BioResearch Product Faire Front Line event on the U of U campus on August 15, 2013. We actively invite life science researchers to join us for this opportunity to network with professional lab research equipment vendors in a comfortable, convenient on-campus environment. Now in our 20th year, BCI is the pre-eminente full-service event marketing and planning company bringing the best products and services to the best research campuses across the country.

These events may in the region may aslo be of interest to you: