To hear Fred Hutchinson Cancer Research Center evolutionary biologist Harmit Malik (above right) tell the story of life, it's one long, ferocious genetic conflict between your body and an unrelenting series of viruses. In each battle, one or the other will win out, but there is no chance of eventual peace, as another virus will always step up (or mutate) to throw itself in the path of your immune system. Understanding how these conflicts have been resolved in our evolutionary past can tell basic researchers like Malik a great deal about the mechanisms and strategies bodies employ to combat illness. Just in this year, the Malik Lab has been in the news for at least three projects focusing on this evolutionary arms race: an HIV study, a lupus study, and a poxvirus study. (We explore each briefly below.) 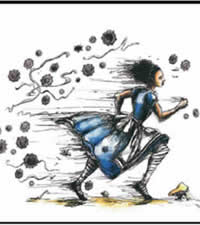 The home page for the Malik Lab within the Basic Sciences Division begins with an image (right) and two quotes:

The Red Queen: “It takes all the running you can do, to keep in the same place.”--Lewis Carroll, “Through the Looking Glass”

The Red Queen Hypothesis: “For an evolutionary system, continuing development is needed just in order to maintain its fitness relative to the systems it is co-evolving with.” --Leigh Van Valen (1973)

[Alice running to keep ahead of genetic competition, courtesy of the Malik Lab]

In Malik's recent HIV research, his team began with the question: Why do chimpanzees not die from HIV? We got it from them, but our immune responses are obviously different. Since we carry around so much brik a brak from viruses our bodies have long since conquered (like bits of shrapnel from ancient wars), the team recreated an extinct retrovirus, altered it so that it could only reproduce once, and watched to see how humans and chimps responded to its introduction. We both defeated it with a similar protein. Then the team reengineered an earlier version of the protein that our ancestors would have carried. In chimps that protein thwarted HIV but not the other retrovirus; in humans it did the opposite. This led Malik and his colleagues to conclude that somewhere along the way, our version of the protein evolved to fight another viral threat, and that's why it is no longer capable of resisting HIV. In chimps that alteration did not happen, so they still have the HIV-effective version of the protein.

About the lupus research project, for which Malik received a $300K grant this year from the Lupus Research Institute, he says in a news release:

“We want to determine whether autoimmunity – when the body’s immune system turns against itself – results from an evolutionary arms race between ancient parasitic genes and the defense mechanisms that control them, which could provide a new model for understanding what causes lupus."

Dr. Malik and his collaborators theorize that some of the body's endogenous retroelements (or parasitic jumping genes) may be at issue in the lupus-diseased body. While these retroelements have typically long-since been identified and quashed by a healthy body's immune system, it may be that lupus patients have a genetic mutation that keeps the body from recognizing and responding when the jumping gene begins to attack. It's an autoimmune problem because nothing is introduced into the newly-diseased body; instead, a once dormant virus is able to once again become active.

The poxvirus study in the Malik Lab had results published in an article in last month's issue of Cell, titled Poxviruses Deploy Genomic Accordions to Adapt Rapidly against Host Antiviral Defenses. Pox viruses are a group that includes smallpox (no longer a world health hazard), as well as variations that are potentially quite lethal. Though the virus rarely mutates, it evolves very quickly and expands its own genome at the same rate as the body's immune system develops and reproduces proteins to try and defeat it. Lead author on the study, Nels C. Elde, Ph.D., a former postdoc in Malik’s lab (and left in the photo above), likenened this expansion capability to that of an accordion, which gives the pox viruses a huge advantage in the evolutionary arms race. Also like an accordion, the genome contracts when it has produced a usable mutation.

2012 funding from NIH and the Lupus Research Institute alone for work on which Malik is the PI tops $850K. Dr. Malik is a previous winner of the Vilcek Prize for creative promise in biomedical science. He is also an assistant professor of genome sciences at the University of Washington School of Medicine and is a Howard Hughes Medical Institute Early Career Scientist. Dr. Elde is now a professor of genetics at the University of Utah Medical Center.

Meet with researchers at Fred Hutch when Biotechnology Calendar Inc. holds its 7th Annual BioResearch Product Faire™ event at the Center in Seattle on October 24, 2012.

Biotechnology Calendar, Inc. is a full-service event marketing and planning company producing on-campus life science research tradeshows nationwide for going on 19 years. We plan and promote each event to bring the best products and services to the best research campuses across the country. Life science researchers, purchasing agents, and lab managers are actively invited to attend to see the latest products and equipment and discuss their laboratory tool and service needs. See our just-released nationwide show schedule for 2013.