When we jump into the swimming pool for some last-minute summer revelry, the worst part of getting out is the feeling of residual chlorine on our bodies. The environment doesn’t respond well to chlorine either- several synthetic chlorine-based compounds are toxic when released into nature and have taken part in the development of numerous superfund sites. Fortunately, a team from the University of Minnesota’s BioTechnology Institute is working on a way to clean up this chlorine, with help from some hungry bacteria.

For those unfamiliar with the term, a superfund site is classified by the EPA website as “an uncontrolled or abandoned place where hazardous waste is located, possibly affecting the local ecosystems or people.” These are most often created by the dumping of hazardous chemicals into the environment by factories and large businesses. These chemicals include many chlorine-based compounds, like trichloroethylene (TCE), perchloroethylene (PCE), and polychlorinated biphenyl (PCB). Since there are 799 classified superfund sites in the United States today, UM researchers are intent on finding ways to clean up these sites. 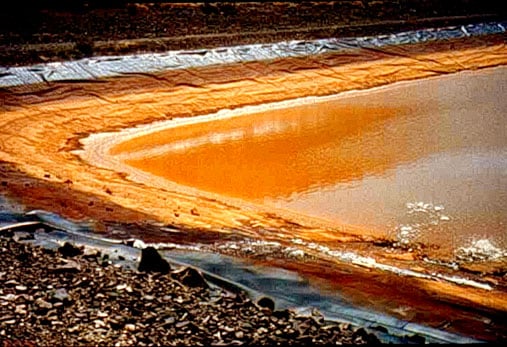 (A superfund site at Bunker Hill, courtesy Wikimedia Commons and the US EPA)

To the surprise of UM civil engineer Paige Novak (pictured left), there exist several bacteria that remove chlorine from the environment just to stay alive. These bacteria breathe chlorine the way we breathe oxygen, which means you can literally dump chemical waste into water where they live and it will no longer be hazardous. This works well for molecules like TCE and PCE, but PCB has more chlorine atoms embedded into its molecular structure and so is tougher to respire.

“People thought that the best that these anaerobic microbes could do with PCBs would be to make them a little less chlorinated,” explains Novak. However, when she and her team delved deeper, they found that “a group of largely unstudied microbes, similar microbes to the ones that breathe PCE and TCE, could completely remove the chlorine from the PCBs.“

As fantastic as this discovery is on paper, applying it in the field is not quite so easy. For example, getting large amounts of these bacteria to superfund sites is an engineering challenge. In addition, PCB molecules get stuck deep in the soil unlike those of TCE and PCE. This means that the bacteria have a harder time reaching the molecules, so they can’t breathe them. So Novak is looking next toward finding nontoxic compounds that these bacteria can breathe so they can survive long enough to find the rooted PCBs.

Biotechnology Calendar, Inc. will be returning to Minnesota this year for both the Rochester Minnesota BioResearch Product Faire™ on September 25th, 2013 and the University of Minnesota, Twin Cities BioResearch Product Faire™ in Minneapolis on September 26th, 2013. Biotechnology Calendar is a full service event company that has produced on-campus, life science research trade shows nationwide for the past 20 years. We plan and promote each event to bring the best products and services to the finest research campuses across the country. If you are a university researcher or a laboratory product vendor, consider attending one of our on-campus trade shows: here is our 2013 schedule.