We live in the information age. Many jobs now require the ability to learn large amounts of information and apply that to novel tasks. In the military this ability is critical. However, mastering a new task, skill or information often takes the right environment, mindset, and sharp focus. It also can require a lot of repetition and time. In some situations, that’s a luxury the military can’t afford. Therefore, the U.S. Defense Advanced Research Projects Agency (DARPA) recently approved $9.85 million in new research funding to develop a system that will help military personnel quickly master new skills and digest vast quantities of information.

University of Wisconsin–Madison biomedical engineer, Justin Williams is leading the effort to find a way of boosting learning ability and speed. Williams’ collaborators at UW–Madison include: Samuel Poore, professor of surgery; Zhenqiang (Jack) Ma, professor of electrical and computer engineering; and Aaron Suminski, senior scientist in neurological surgery and biomedical engineering. Dr. William’s team will be working with neuroscience experts from around the country in an attempt to create a low-cost, easy-to-use system that accelerates learning by stimulating nerves in the head and neck to boost neural activity in the brain.

The concept is based on new biomedical research, called targeted neuroplasticity training. In recent studies, connections of neurons in the brain have been strengthened by activating peripheral nerves, those outside of the brain and spinal cord. For example, stimulating the vagus nerve can boost brain chemicals such as acetylcholine, dopamine, serotonin, and norepinephrine. These chemicals are known as neuromodulators and during learning they regulate changes in the connections between neurons in the brain.

In recent experiments other researchers demonstrated that stimulating the vagus nerve while an animal was learning a basic task dramatically increased the speed at which the animal learned the task. In an article for the University of Wisconsin-Madison news, Dr.Williams commented, “It seemed to work, whether it was a motor task, memory, auditory task or something else.”

Dr. Williams is among the nation’s leaders in neural interface technology research and optimization. In fact, in 2009 Time magazine included his “thinking cap” on its list of the year’s 50 best inventions. Dr. Williams’ brain-computer interface allows paralyzed or “locked-in” people to type and send tweets using only their thoughts.

With the DARPA funding, Professor Williams and his collaborators will initially develop ways of measuring, monitoring and optimizing the brain’s response during targeted neuroplasticity training. Ultimately, they hope to develop a noninvasive, user-friendly technology that delivers a stimulus, monitors neural response and dramatically accelerates learning.

Beside the military applications, the technology may also be useful, in controlled environments, for people who have learning disorders or who are afflicted with diseases such as Alzheimer’s.

DARPA is just one of the resources for research funding available to U Wis scientists.  So far in 2017, the National Institute of Health has made 267 awards to the university totaling $94,805,680.

Those interested in selling laboratory products to this well funded market should plan on participating in the 18th annual Bioresearch Product Faire. This event will be held on campus on September 8, 2017 and is an excellent opportunity for laboratory product suppliers to meet face to face with U Wis researchers and discuss their equipment needs.  To learn how to increase your lab product sales by displaying and demonstrating your products at this biotechnology trade show call (530) 272-6675 or click the link below.

Science professionals are invited to attend for free. 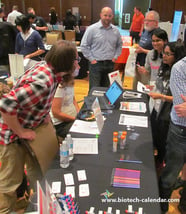