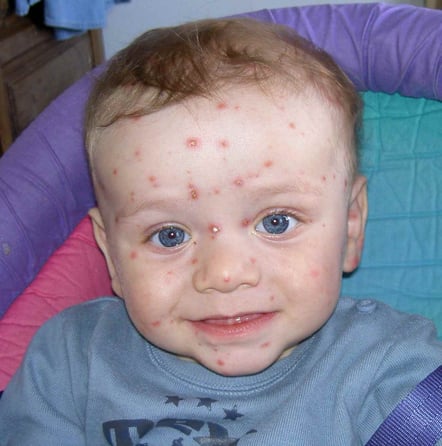 (Chicken pox is one of many diseases caused by the herpes viruses. Image courtesy of Wikimedia Commons)

What are pathogenic DNA viruses?

Viruses that hijack cells into producing masses of self-assembling cages that are then loaded with the genetic blueprint for the next infection in order to generate new viral particles. Two of the most common types of DNA viruses are bacterial viruses and human herpes viruses.

Until recently, scientists did not have a clear picture of just how DNA was loaded into those viral cages, or capsids. However, researchers at Thomas Jefferson pieced together the three-dimensional atomic structure of a doughnut-shaped protein that acts like a door or ‘portal’ that allows DNA to get in and out of the capsid.

What’s new with this research?

University scientists discovered that this protein begins to transform its structure when it comes into contact with DNA.  The doughnut-shaped protein is its final, mature form. Gino Cingolani, Ph.D., a Professor in the Department of Biochemistry and Molecular Biology explained in an article for Jefferson Research News, “Researchers thought that the portal protein acts as an inert passageway for DNA. We have shown that the portal is much more like a sensor that essentially helps measure out an appropriate length of DNA for each capsid particle, ensuring faithful production of new viral particles.”

Proteins can change structure and thus their function many times before reaching their final mature state. While these intermediate states sometimes exist for tiny fractions of a second, they can have important functions. In this case, the immature portal protein was found to be surprisingly asymmetric and to have the ability to bind strongly to both the motor and the DNA itself.

“We think that DNA binds to the immature portal protein and wraps around it like a python, as it enters the viral capsid with the help of the motor protein. This DNA stranglehold causes the portal protein to begin to transform into its final symmetric state that because of its weak binding will ultimately release both the DNA and the motor, cutting off the DNA-loading at an appropriate length,” Dr. Cingolani went on in the same article. “It’s a completely novel mechanism for sensing DNA.”

Since the portal protein is unique to viruses, that makes it a potentially good drug target. Because some herpes viruses infect and lay dormant in human cells until they reawaken by stress, developing a therapy that could interfere with viral production at different levels could prove a useful therapeutic strategy. There are eight members of the herpes virus family. Some types cause relatively minor symptoms; however, others cause more serious diseases such as chicken pox, mononucleosis, lymphomas and Kaposi sarcoma. Dr. Cingolani's study is expected to continue through 2021 and could very well lead the way to treating or even preventing those diseases. 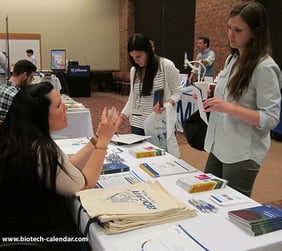 brings researchers face-to-face with laboratory suppliers. The 9th Annual BioResearch Product Faire™ at Thomas Jefferson University will be held on Friday, May 11th, 2018.

Life science professionals are invited to attend the annual on campus trade fair for free to view the latest lab supplies and technology. Click the button below for additional information or to pre-register.

Dr. Cingolani's virus study is only one of over 130 research projects awarded NIH funding in 2017. If you are a laboratory equipment supplier, this biotech trade show is an excellent opportunity to meet with life science researchers and educate them about your lab or chemical supply products. Call us at (530) 272-6675 or click on the following link to reserve a space and increase your scientific sales in 2018. Laboratory equipment suppliers may want to make the most of their marketing budget by also participating in the biotechnology trade show happening at the near by University of Pennsylvania, Philadelphia.