Michael Caligiuri, MD, director of the OSUCCC and CEO of the Hospital and Institute stated in The James News site, “With the dollars generated through Pelotonia, we have funded more than 100 innovative new idea grants, three statewide cancer research initiatives … launched early-stage drug development efforts through our …Drug Development Institute, brought digital pathology to Columbus and provided more than 400 scholarships to students with an interest in cancer.” 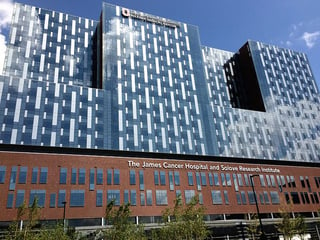 A total of $1.8M will be awarded to the winners of the Winter/ Spring Pelotonia Idea Grants.  This two year research funding went to 11 breakthrough cancer research projects, including:

Research shows that men are more susceptible to, and die more frequently of, melanoma than women. Scientific data suggests the hormone estrogen protects against melanoma in women. In this study, researchers will assess the role of a estrogen receptor in melanoma onset and progression to identify estrogen-dependent gene targets.

Triple-negative breast cancer has a high rate of mortality due to a lack of established biomarkers and effective targeted therapy. The objective is to understand specific molecular crosstalk between numerous genetic pathways and inflammatory markers, and how that interaction influences cancer development and spread.

More women with breast cancer without a mutation or family history, who do not need the procedure for medical reasons, have been undergoing contralateral preventive mastectomies. This study will evaluate treatment decisions in early-stage breast cancer patients to assess how communication with their providers affects their decision-making.

Other Idea Grant winners cover a wide range of cancer research: investigating the relationship between non-melanoma skin cancer and second primary cancers; using rapid research autopsies to obtain samples of cancer cells from different organs of patients and studying their genomes to determine how cancer cells acquire resistance; developing a novel and effective therapeutic approach for as yet incurable multiple myeloma; finding a new way to treat advanced prostate cancer; and tackling two genetic mutations associated with Leukemia. Finally, researchers at Ohio State will investigate the role of a specific DNA damage repair pathway -- DNA base excision repair (BER) -- in cancer development and progression. This basic science study could yield many breakthroughs in cancer research and lead to new targets for cancer treatments.

Researchers are invited to attend this free event and can save time by preregistering through the link below.