Some of the legitimate but seemingly ludicrous research toasted during the night's festivities included 2012 winners in these categories:

MEDICINE PRIZE: Bestowed upon a French team for their study advising doctors who perform colonoscopies how to minimize the chance that their patients will explode from the ignition of released gases. [Read the published paper: Colonic gas explosion during therapeutic colonoscopy with electrocautery]

PHYSICS PRIZE: Bestowed upon emeritus Stanford mathematician Joseph Keller and his UK physics colleagues for calculating the balance of forces that shape and move the hair in a human ponytail (i.e. they explain the classic side-to-side bounce). [Read the published paper: Shape of a Ponytail and the Statistical Physics of Hair Fiber Bundles]

CHEMISTRY PRIZE: Bestowed upon a Japan research team for determining the ideal density of airborne wasabi (pungent horseradish) to awaken sleeping people in case of a fire or other emergency, and for applying this knowledge to invent the wasabi alarm. [Read their US patent application here.]

NEUROSCIENCE PRIZE: Bestowed upon a UCSB team led by Craig Bennett, along with colleagues at Vassar and Dartmouth, for demonstrating that brain researchers, by using complicated instruments and simple statistics, can see meaningful brain activity anywhere — even in a dead salmon. [Read the published paper: Neural Correlates of Interspecies Perspective Taking in the Post-Mortem Atlantic Salmon: An Argument For Multiple Comparisons Correction]

FLUID DYNAMICS PRIZE: Bestowed upon a UCSB team led by Rouslan Krechetnikov for work studying the dynamics of liquid-sloshing to learn what actually happens when a person walks while carrying a cup of coffee. [Read the published paper: Walking With Coffee: Why Does It Spill?] 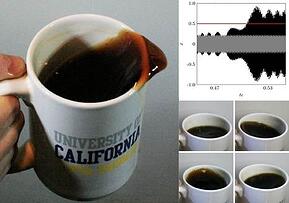 Other winners of these perhaps-coveted international awards carry out their interesting research in the Netherlands, Peru, Russia, Sweden, Rwanda, and Canada. All winning teams sent a representative to the ceremony, except for the US Government General Accountability Office, which won this year's Literature Prize for issuing a report about reports about reports that recommends the preparation of another report on the preceding reports. (Wow, read it here if you dare.) That absense notwithstanding, it does seem that laughter, like science, is universal. As the Ig Noble Prizes (the "Igs," for short) are billed: First you laugh, then you think.

In a further demonstration of serious scientists' capacity to appreciate and respond to humor, the evening's program was kept free of overlong (and tedious) speeches by a very special moderator. Should any awardee begin to get too comfortable at the microphone, they were treated to the intervention of the popular Miss Sweetie Poo (a charming 8-year old) who would come on stage and kindly tell them: "Please stop. I'm bored!" repeatedly until they got the message. This tradition of excellence in encouraging brevity dates back to the 1999 awards ceremony and is the subject of an enlightening short video, below.

[Miss Sweetie Poo advises winners that they are talking too much, courtesy of Improbable Research]

A good time was apparently had by all: Nobel laureates, Ig Nobel laureates, an auditorium full of well-wishers and science fans, and quite a few media journalists. Clearly, if unexpectedly, we seem to live in an age when scientists are praised for being uniquely human and people of all ages want to know what they're doing. Science is cool. Who'd have thought it?

Biotechnology Calendar, Inc. has always known scientists were cool, and it's with our appreciation of what they do that we hold our professional tradeshows on academic campuses across the U.S. every year (for 2+ decades) so that life science researchers can network with select lab equipment specialists to discover the best tools to carry out their important projects, probable or improbable. We put on full-service, catered, convenient (and we think fun) events at places like Harvard Medical School and UCSB. Our 2013 Show Schedule is out, and we'll mention these dates specifically:

For a free funding report and information about exhibiting at either venue, click below: