The College of Veterinary Medicine (CVM) at WSU is one of the top vet med programs in the country. Established as early as 1899, the various branches of the college are currently housed in no fewer than 7 buildings on the WSU Pullman campus. One of several unique facilities is the Animal Disease Biotechnology Facility, which is dedicated to the use of molecular biology to resolve diseases in agricultural animals with application where appropriate to human health. WADDL is located in the Bustad Veterinary Sciences building, along with the Dept. of Veterinary Microbiology and Pathology. Bustad is next door to the Veterinary Teaching Hospital. Just opened this month is the Paul G. Allen Center for Global Animal Health.

Currently under construction is the $96M Veterinary Medical Research Building (VMRB), which broke ground in 2011 and is due for occupancy in early Spring 2013. Located within the Research and Education Complex, the building site is east of the CVM's Biotechnology/Life Sciences building, near Johnson Road and Stadium Way. The Biotech/Life Sci building is home to the School of Molecular Biosciences (SMB) and Center for Reproductive Biology (CRB), both of which joined the CVM in 2010. When finished, the VMRB will  offer 77,250 usable square feet of state-of-the-art biomedical research lab and support space for health science teaching and research programs. 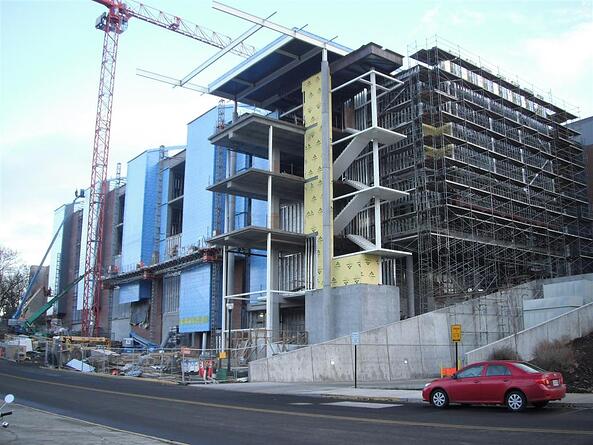 To say that the College of Veterinary Medicine at WSU Pullman is a major force driving excellence at the east Washington campus is an understatement: it is where life science research happens at Washington State University. Consider that the School of Molecular Biosciences formed in 1999 through a merger of the departments of Biochemistry and Biophysics, Genetics and Cell Biology, and Microbiology. Eleven years later, the school became a part of the CVM. If you are working in cell biology at WSU, you are working within the College of Veterinary Medicine. Far from the tech hubs of Washington's western coast, this land grant university with a strong agricultural and animal science orientation has leveraged that strength as a vehicle for expanding its life science research capacity, all the while  growing its vet med core with a zoonotic approach to the study of life in all of its forms and complexity.

If you are a life science researcher or laboratory manager in need of new research tools, or a lab supply vendor in the Pullman area interested in the WSU research marketplace, plan on attending Biotechnology Calendar Inc.'s Pullman BioResearch Product Faire™ trade show at Washington State University next month on October 23, 2012, then again on October 22, 2013.

For more information on the WSU marketplace an on exhibiting, click the button below.