Calden Carroll, a graduate student working in the lab of UO chemists Mike Haley and Darren Johnson, was studying ways to “turn on” a class of compounds when chloride was present, causing them to light up with a green, fluorescent light. At the end of the day, however, it was the nitrates that emitted light, instead of the chlorides. (image credit: Haley Lab, Univeristy of Oregon)

Rather than considering the project a complete failure, the enterprising researchers repurposed their design and developed SupraSensor, a new wireless sensor that can measure nitrogen levels in soil. It turns out that visualizing the movement of nitrate was not useless, instead it was the potential solution to a huge problem facing farmers. 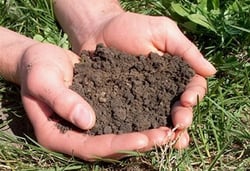 According to a university press release, the discovery could help solve a $2.4 billion problem for farmers and agriculturists who risk over applying nitrate fertilizers and damaging crops and contaminating waterways. As one of the primary components of fertilizer, nitrates often wash off fields with rainwater and irrigation and end up in places where their presence could likely have deleterious effects on the environment.

OU’s team of researchers say that the new SupraSensor could reduce the amount of fertilizer applied by 30% or more, saving farmers and growers over $3 billion in fertilizer costs annually while minimizing environmental water pollution and reducing energy demand by more efficiently applying the energy-intensive nutrient.

The continued development of SupraSensor represents a huge potential boon to agriculture, and has garnered plenty of r&d funding as a result. In addition to funding from the NIH and NSF, $60,000 was given by Business Oregon, the state’s economic development agency.

“We are extremely grateful for the support provided by the National Science Foundation, National Institutes of Health, and the State of Oregon agencies that have helped us get to this point,” said Johnson. “We plan to scale up our development pathway to get this device in the hands of crop growers and wastewater managers as soon as possible.”

In addition to this significant discovery, researchers at University of Oregon occupy a marketplace that generates billions of dollars for the state of Oregon, and receives large amount funding for important life science projects. 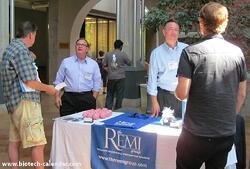 Some of the most active and well-funded life science researchers in the state call University of Oregon home. That is why biotech and lab supply vendors interested in meeting Oregon’s best and brightest will be attending the 5th Annual BioResearch Product Faire™ Front Line event at University of Oregon on September 1, 2015.

This annual event brings together lab vendors with prominent researchers who are highly subsidized for their work and are actively searching to purchase new biotech and laboratory supplies. Biotechnology Calendar, Inc. hosts this life science tradeshow event and over 60 other premier events at top research universities nationwide.

To learn more about gaining access to the expansive University of Oregon research marketplace, click the link below: