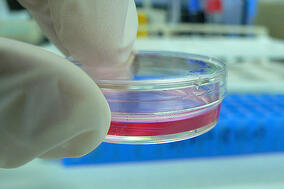 Nit1 is a gene known as a "conserved" gene, which is a gene essential for performing necessary biological functions in a wide variety of life forms. Limited research has been conducted into the functions of Nit1 gene, but previous results led researchers to believe that it inhibited cancer growth. Now, thanks to the work of researchers from Thomas Jefferson University, we have crucial new insight into the role this gene plays.

The Philadelphia research team, led by radiation oncologist Dr. Bo Lu, M.D., Ph.D. from Jefferson’s Sidney Kimmel Medical College, performed their research on mouse models with a KRAS mutation that caused lung cancer. Lung cancer caused by the KRAS mutation was chosen as the focus of the study due to its aggressiveness and difficulty being treated. Mouse models, both with and without Nit1 present, were crossbred to study what the presence of Nit1 does. Through this, the team discovered that the models with the largest lung tumors had Nit1 present. These tumors were five times larger than those in the models lacking Nit1.

Furthermore, the researchers found that silencing Nit1 in human lung cancer made the cancer cells less likely to survive. With the conjecture that inhibiting Nit1 may function as a potential drug target, the team investigated whether the benefits of the chemotherapy drug cisplatin could be increased by inhibiting Nit1 in those with lung cancer.

In answer to this research question, Dr. Lu said, “The cancer was significantly more sensitive to cisplatin when Nit1 was silenced. This is a story of discoveries — a tale of a false assumption that has led to a possible new drug strategy.”

Dr. Lu also explained, "Lung cancer in most patients is becoming increasingly resistant to the therapies that exist today, making lung cancer the leading cause of cancer death worldwide. There is a critical need for new agents, and an inhibitor of Nit1 may represent a new drug strategy.”

Results from this study have been published in the journal Oncotarget.

Laboratory suppliers interested in marketing lab supplies to active researchers at Thomas Jefferson University in Philadelphia are encouraged to participate in the 7th Annual BioResearch Product Faire EventTM, coming up on May 13, 2016. At this popular event, lab suppliers will be able to display their tools and technologies for over 115 active life science researchers looking to discover new products and to use in their labs.

For more information about exhibiting at the Thomas Jefferson University event on May 13th, 2016 or to read more funding statistics for the university, please visit the link below: