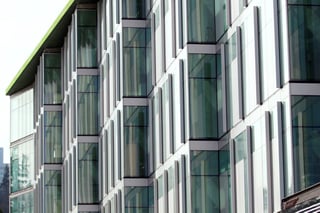 Oregon Health and Science University's KCRB will house a large number of research programs focused on early cancer detection, computational biology, and immuno-oncology, and . In fact two floors of the building will be dedicated to the Center for Early Detection Research, led by Sadik Esener, Ph.D. a nanotechnology expert.

Also among the occupants is Spellman lab, which works on research focused on advance stages of cancer. Its leader Dr. Paul Spelling is principal investigator in multiple areas of genetics-related cancer research.  Spellman lab moved from the Collaborative Science Building to the Knight Research Building designed by SRG Partnership to encourage inhabitants to collaborate. One of the features of the building is the equipment corridor called the “collabrador” where teams may drop in and out to use the equipment as needed.

Chris Boniface, the lab manager for Spellman lab stated in an article for the Portland Tribune, “The idea is they’ve packed us in so tight that people working on different things, like microscopy, or DNA sequencing work, will be able to bounce ideas off each other.”

Since this is a research building, most of its 650 occupants will be physicians, those with doctorates and well-established scientists as opposed to undergraduates. There are several wet labs — laboratories where liquids, chemicals or drugs are used to conduct experiments — as well as “dry” labs — where computers or computer-generated models are used to analyze biological data.

Brian Druker, M.D., director of the OHSU Knight Cancer Institute stated in an update for OHSU News, “We want this to be the building where we end cancer as we know it. We’re trying to bring a collaborative spirit to defeating cancer.”

So far in 2018 OHSU has been awarded 425 grants from the National Institutes of Health totaling more than $217,000. Forty-seven of these were through the NIH's National Cancer Institute and total over $31 million. 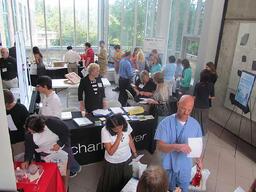 Biotechnology Calendar, Inc. produces an annual BioResearch Product FaireTM event in Portland that brings together lab suppliers with more than 180 of these active OHSU scientists, so they can display and demonstrate their latest products.

If you are a laboratory equipment supplier wanting to market to these well funded researchers, you should plan on participating in this event. The 16th Annual BioResearch Product FaireTM  in Portland, OR will be held on Friday, November 12th, 2018. At the 2017 event, researchers from 22 different research buildings and 39 on-campus departments attended the event.