Dormant versus active. These words bring about thoughts of volcanoes that haven't erupted in millions of years, but have the potential to at any time. Researchers at the Icahn School of Medicine at Mount Sinai have discovered that certain cells, like volcanoes, can stay dormant until a certain factor (or switch) is flipped to activate them. (Image courtesy of Wikimedia Commons).

A research team at Mount Sinai recently discovered that the gene NR2F1, when treated with certain drugs, has the ability to turn on and off the dormancy of tumor cells, controlling whether or not they are active.

The common cancer drugs Azacytidine and Retinoic Acid were found to increase the amount of active NR2F1 in tumor cells in the body. When the NR2F1 gene is turned on, it was found to program tumor cells to be dormant, but when NR2F1 is turned off, it causes tumor cells to divide and multiply which caused the dormant cells to spread throughout the body.

“Our results explain why some tumor cells scattered through the body are committed to remaining harmless for years, while others cause active disease,” explained Julio A. Aguirre-Ghiso, PhD, of the Icahn School of Medicine. “In finding this master switch we found a way to analyze tumor cells before treatment to determine the risk of a cancer recurrence or metastasis.”

The New York researchers found this function of NR2F1 in many cancers in mice, as well as in prostate cancer cells in humans. Since the NR2F1 gene controls the dormancy and activity of tumor cells, combining these two cancer drugs may play a large role in keeping tumor cells dormant many years after they have separated from their tumor of origin.

“Azacytidine and retinoic acid, the latter a form of vitamin A, prevented tumor cells from rapidly multiplying, restored normal cell function, and activated several tumor suppressor genes that are often turned off in tumors,” said Maria Soledad Sosa, PhD, from Mount Sinai. “We now have strong evidence that combining these well-known drugs may have a profound, long-lasting therapeutic effect.” 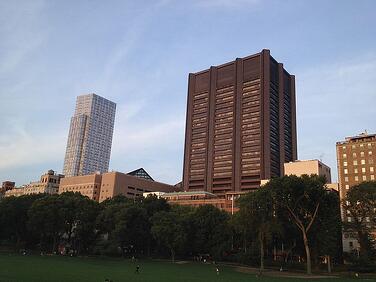 Mount Sinai is a multi-million dollar research marketplace that makes great contributions to the life sciences. In the 2014 fiscal year, Mount Sinai researchers received more than $240.5 million in total funding, with the following departments received substatnial amounts of that funding:

*Data from the NIH RePorter

Interested in meeting face-to-face with more than 200 active bioresearchers at Mount Sinai in March? Consider participating in the 10th Annual BioResearch Product Faire™ Event at Mount Sinai on March 25, 2015. This event gives lab suppliers the opportunity to:

To learn more about participating in the March event, and to receive funding information about active grants and projects at Mount Sinai, visit the link below:

Researchers at Mount Sinai interested in attending this event can visit the link below to pre-register and save time at the door the day of the show:

While in New York, make the most of your time and money by participating in the other show happening nearby the during the same week: