Nerves play a vital role in the well-being of our body. Nerve damage is among the most crippling physical damage we can sustain, which is why it is in our best interest to protect them when at all possible. So when new bioresearch from Washington University in St. Louis lays out a method to prevent the body from destroying axons, which transmit nerve signals throughout the body, it’s a sure signal of improvement in the field of nervous studies. 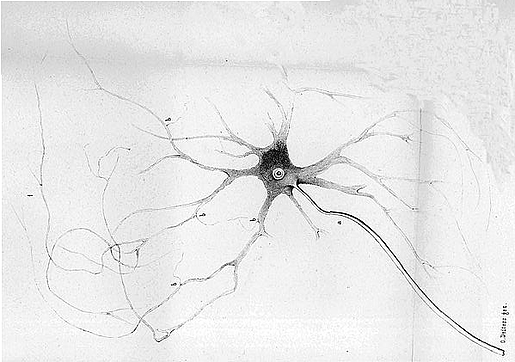 (An ostensibly protruding axon coming out of a nerve, courtesy of Wikimedia Commons and Deiters)

It is worth noting that there are actually times when it is useful to break down axons, for example during the development of embryos. During the initial construction of the nervous system, many axons are built that are only needed in the developmental stage, and so the body needs a way to remove the  excessive ones. This method of self-degeneration is useful in later stages of life as a form of insurance against defective axons. If an axon is damaged, the body removes it from the nerve, saving the healthy axons from potential damage. In this way, the removal can be compared to apoptosis, the method that destroys superfluous and defective cells.

But just like apoptosis, the process of axon degeneration can go too far. Diseases like glaucoma and multiple sclerosis can destroy axons unnecessarily, causing a host of other problems for a person. In the words of Aaron DiAntonio, professor of developmental biology at WUSTL, “Treating axonal degeneration could potentially help a lot of patients because there are so many diseases and conditions where axons are inappropriately lost.” He acknowledges that preserving axons will not cure the diseases in question, however “the hope is that we could slow the progression of a whole range of diseases by keeping axons healthy.”

DiAntonio and his fellow researchers isolated a particular gene called Phr1 that performs the equivalent of axon apoptosis. By removing the gene from mice, they found that they could extend the life of damaged axons that would have otherwise been removed. In addition, these mice suffered no side effects from the removal of the gene. DiAntonio sees potential in a drug that can stop Phr1 in an effort to save axons. In a WUSTL Hope Center article, DiAntonio explains that even though similar axon-degenerating genes have indeed been found before this study, Phr1 is particularly important because “it is the first one that shows evidence of working in the central nervous system. So it could be important in conditions like glaucoma, multiple sclerosis and other neurodegenerative diseases where the central nervous system is the primary problem.”

Even axon damage caused by our own drugs, like some of the ones used in chemotherapy, can be avoided with the removal of Phr1. In fact, since the beginning and end times for such treatment are well determined, unlike the onset of disease, the team is confident that the proposed drug can make the largest impact in this regard.

This WUSTL study was supported by the American-Italian Cancer Foundation, the European Molecular Biology Organization, the Muscular Dystrophy Association and a series of grants from the NIH. To read  more abound funding for research at Washington University, click on the button below:

Biotechnology Calendar, Inc. will be visiting Washington University in St. Louis in just one week. On May 23rd, 2013, we will hold our St. Louis BioResearch Product Faire™ event on the WUSTL campus. This show is an excellent opportunity for life science scientists and laboratory equipment suppliers to network and discuss their research needs and solutions. To see our 2013 show schedule, click here. To attend the St. Louis BioResearch Product Faire™ specifically, click this button: