As humans, we like to think of ourselves as superbly evolved, which is a completely valid standpoint if you place emphasis on things like consciousness and inventiveness. But our cohabitants of Earth have developed some impressive abilities of their own, many of which we can only barely understand. Take for example the bacteria that are shocking several researchers at the University of Minnesota, Twin Cities lab with their unique ability to change the electrical state of metals. 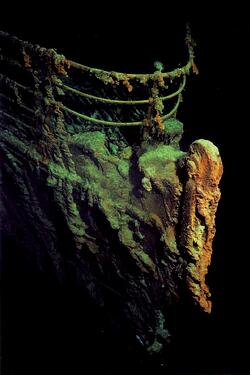 If you’ve seen sunken shipwrecks covered in rust, then you’ve already seen these bacteria at work. If not, we’ve included a picture of the bow of the RMS Titanic, courtesy of the National Oceanic and Atmospheric Administration. The same phenomenon that happens to iron on land is initiated by bacteria under the sea, which steal electrons from the metal in order to make rust. The passing of electrons through the bacteria also creates an electric current, but this effect goes largely unnoticed in the bacteria community. However, researchers like University of Minnesota’s Daniel Bond and Jeffrey Gralnick noticed that these types of bacteria don’t necessarily require metals like iron, only the electrons themselves. With this idea in mind, they charged an electrode with electrons using a battery. The bacteria thrived and produced a current just as it would with iron.

Taking iron out of the equation is a nice first step, but removing entirely the input of electrons (notably from the electrode) would be even better. Fortunately, just as these strains steal electrons, there are other kinds of bacteria that prefer to give them away. These bacteria like to give their electrons to metals when they can, but Bond and Gralnick found that they will donate to other bacteria given no other options. This forms a self-sustaining, electricity-producing environment based simply on the flow of electrons. 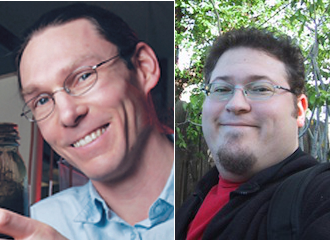 Professors Daniel Bond and Jeffrey Gralnick, courtesy of the University of Minnesota.

Bond and Gralnick, who are both associate professors in microbiology, see several large-scale applications for these microbes. For instance, they could be used as a biosensor, giving off an electrical current when they come into contact with a particular substance whose electrical state they can change. Or, in a more grandiose situation, such bacteria could donate electrons to radioactive compounds like uranium, which become less toxic with a few extra electrons. The realm of possibilities for these microbes is just opening, and the University of Minnesota is at the forefront of its exploration.

Funding for this research comes in large part from the Office of Naval Research, the Initiative for Renewable Energy and the Environment, and the National Institutes of Health and Cargill. For more information related to funding and research at the University of Minnesota, read our University of Minnesota Funding Report by clicking the following button:

Biotechnology Calendar, Inc. will be returning to the University of Minnesota this year for both the Minneapolis BioResearch Product Faire™ on September 26th, 2013 and the St. Paul BioResearch Product Faire™ on September 27th, 2013. Biotechnology Calendar is a full service event company that has produced on-campus, life science research trade shows nationwide for the past 20 years. We plan and promote each event to bring the best products and services to the finest research campuses across the country. If you are a university researcher or a laboratory product vendor, consider attending one of our on-campus trade shows: here is our 2013 schedule.