Currently, much of the data on Alzheimer’s disease comes from patients who are already suffering from it. This is largely due to the fact that the disease doesn’t have many symptoms beyond cognitive impairment, and once you’re recognizing cognitive impairment as a symptom, preventing the onset of Alzheimer’s is likely an impossibility. However, the Madison researchers, led by professor of geriatrics Sterling Johnson (left, courtesy of aging.wisc.edu), had a look at this data and noticed a common trend: they all had reduced blood flow to the brain.

Using an advanced MRI technique, the researchers began to examine the blood flow of people who weren’t exhibiting symptoms of Alzheimer’s, but who did have a family history of the disease. Sure enough, people whose mother had Alzheimer’s displayed a reduced blood flow compared to a control group. Johnson believes this can serve as an earlier symptom for the disease, allowing doctors to take action sooner. For example, it is known that amyloid plaques build up in the brain and block neuron signals during the course of Alzheimer’s disease. With more advance notice, researchers and doctors can focus on experimenting with chemicals to break down these plaques, possibly before it’s too late.

“After years of frustrating failure to stop late-stage Alzheimer’s, it’s essential to find and treat the mild stages,” says Johnson in a UW article. “We need to identify Alzheimer’s as early as possible, before the really destructive changes take place.” 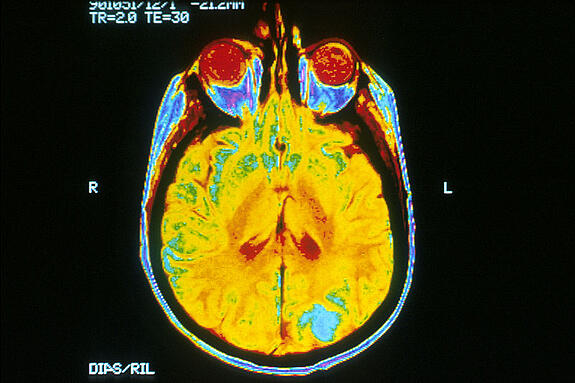 (A human brain as shown in an MRI scan, courtesy of Wikimedia Commons)

Though it might seem like an unnecessary detail, the fact that Johnson and his team are able to determine the decreased level of blood flow simply from an MRI scan is quite remarkable in itself. Similar methods of measuring a person’s blood flow include using radiation during the scan and injecting a drug tracer for visibility. Detecting the signs of reduced blood flow using only MRI is both less expensive and less invasive. In addition, the use of brain imaging allows the research groups to test drug effectiveness with a study group of just two hundred people- as opposed to the 1500 or 2000 needed for conclusive data in similar methods.

This new discovery form the University of Wisconsin yields hope for detection of Alzheimer’s disease that’s faster, more effective, and less expensive. As Johnson puts it, “Now we can study before the symptoms begin, and someday intervene while there is still a chance to forestall this devastating disease."

This study received funding from the National Institute on Aging, the US Dept. of Veterans Affairs, and the state of Wisconsin. For more funding information regarding the University of Wisconsin, Madison, please click the following button:

If you are a science researcher or lab supplier interested in networking with others in your field at the University of Wisconsin, Biotechnology Calendar, Inc. invites you to attend our annual Madison University Research Park BioResearch Product Faire™ and Madison BioResearch Product Faire™  on September 4th and 5th of this year, respectively. Biotechnology Calendar, Inc. is a full-service science research marketing and event-planning company.  For more information on these upcoming events, click on the appropriate button below.