You know there’s been a paradigm shift in the world when complicated biomolecular problems are solved by gamers, as in the recent, much-reported case of an AIDS protein solution worked out by Foldit players in a crowdsourcing research challenge posed by scientists at the University of Washington.  In the longrun, the most significant part of this remarkable story may be the experiment itself and the implications it has for the way we think about work and play, and how that might influence the way we approach future research challenges.  UW computer game scientists and biochemists developed the online game Foldit to see if non-scientist gamers could be taught enough science and engaged long enough to work out a scientific problem.  And it turns out they can. 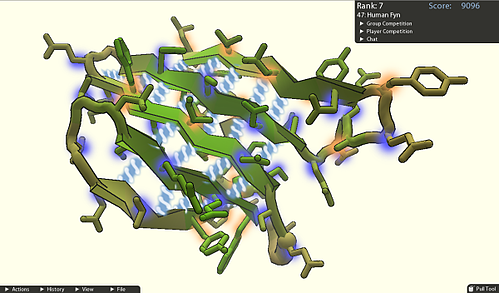 The Foldit game ("Solve Puzzles for Science") is the product of the UW Center for Game Science, in the School of Computer Science and Engineering, and is funded by NSF, the Howard Hughes Medical Center, Microsoft and DARPA (among others). These UW game scientists take a provocative position in their research, with insights like these:

So, does the success of the Foldit challenge in deciphering the HIV molecule tell us more about how smart gamers are or how valuable the element of play is for scientists as well as (or at least as much as) “ordinary people”? 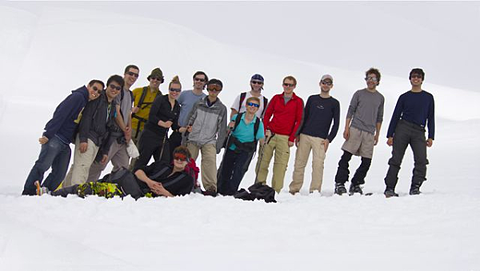 One of the UW researchers involved in this crowdsourcing research challenge is David Baker, a biochemist we've referenced before (in a May blog on computational biology).  His lab page includes various pictures (like the one above) of himself and his lab partners—on an outing in the snow (presumably around Seattle).  They are all clearly having fun.  So is this how they see themselves in their “off time,” or is it integral to who they are as scientists?  Baker describes the work he does on his lab page:

I am very lucky to be working with wonderful colleagues on a fascinating problem: how to model biomolecular systems with sufficient accuracy to enable the computation of the structures of the macromolecules which occur in nature from genomic sequences, and the design of a whole new world of macromolecules with new and useful functions... I spend almost all of my time wandering around the lab talking to people, enjoying the excitement of new results as they come in and trying to help troubleshoot projects that are not working. When I sense that I cannot ask anyone yet another time if anything interesting has happened in the past few hours I check the weekend mountain weather forecast, and then try again.

Clearly being energized is an important part of being productive in scientific research.  When these researchers are not finding what they want in the lab, they head to the mountains for stimulation and challenge.  The mind and the body like to be engaged, perhaps not on such different planes.  That researchers who check the weekend mountain weather forecast have created a way for gamers to solve scientific problems may not really come as a surprise.  Scientists are not trying to be machines.  They have machines.  But real discovery in many cases needs a human mind with its curiosity and unique perception to solve complex problems.  And the human mind needs to be stimulated for a lengthy period of time in order to solve these problems.  Whether you call it play or work is a semantic distinction that may not really matter in the end.

UW’s Foldit is a crowdsourcing research challenge not unlike those promoted by industry to solve complex problems and increase productivity of their technology (see our blog on Life Tech’s Crowdsourcing Challenge).

If you are a scientist in the Seattle area interested in learning about new laboratory research products, sign up now to attend Biotechnology Calendar, Inc.'s Seattle BioResearch Product Faire event at UW, coming up on October 27, 2011. Laboratory equipment suppliers are invited to showcase their products and network with top university researchers in a professional, popular trade show environment. This is BCI's 22nd Semi-Annual show in Seattle on the University of Washington campus.