Bioscience & Engineering Research Buildings in the Pipeline at University of Arizona

When the Bio5 Institute's new building opened in 2007 north of Speedway on the University of Arizona (UA) campus in Tucson, it signalled a new period of growth and innovation that would link the UA Medical Center with interdisciplinary biomedical and life science research on the main UA campus.  The Bio5 building, also known as the Thomas W Keating Bioresearch Building (and formerly named the Institute for Biomedical Sciences & Biotechnology [IBSB]) is "a high-tech laboratory facility supporting interdisciplinary molecular life sciences research."

(The Keating Bio5 Building, courtesy of the University of Arizona)

Four years later, the Board of Regents have included plans for a new bioscience research lab building next door to Bio5 as well as an engineering research building nearby in the UA's three-year Capital Improvement Plan, which was unanimously approved by the full Board on September 22. The new lab facilities would be similar to the Keating Bio5 Building in concept and design, opening up spaces and promoting faculty collaboration as well as student engagement.  The proximity to the UA Medical Campus and the fact that Bio5 houses UA's Clinical and Translational Science Institute (CTSI) suggest that the future bioscience facility will also be a center for biomedical research with physician researchers. 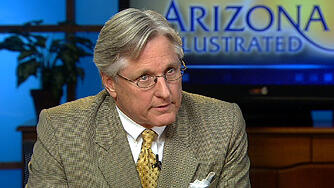 In an op-ed piece in the Arizona Capitol Times October 17, Arizona Board of Regents Chairman Fred DuVal recapped the Board's budget request, including the Capital Plan, and urged the Governor to approve the funding and "begin reinvesting in higher education."  State funding cuts over the past few years have forced the Regents to drastically increase tuition and fees.

The UA plan includes more than $255 million worth of capital projects; $145 million of that would go to the construction of the new engineering research and bioresearch facilities ($60M and $85M, respectively). The aim of the new facilities is to boost research and increase the number of doctoral research degrees awarded, as well as research expenditures and invention disclosures.  Being able to hire top new research faculty and expand research generally are also motivators of new facility plans.

According to Leslie Tolbert, senior vice president for research and professor of Neuroscience at UA:

“People are sort of cramped to the gills in the space they have.  We need more space. But we need better space.”

If you are a biotech or biomedical researcher, lab manager, purchasing agent, or life science lab supply vendor, plan on attending Biotechnology Calendar Inc.'s Tucson BioResearch Product Faire show coming up on November 10, 2011.  This annual event, now in its 9th year, is an excellent way to network with other researchers and discover the latest research  technologies in a informal environment.