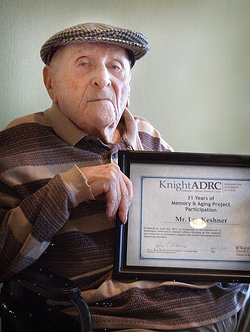 Results of two Alzheimer's research studies from Washington University in St. Louis (WUSTL) have been published in the past month, adding significant new information to our understanding of the disease and how it functions.

Both studies come out of the Knight Alzheimer's Disease Research Center in the Department of Neurology at Washington University School of Medicine, which is one of 30 such centers funded by the National Institute on Aging (NIA).  The Knight ADRC's clinical research arm is the longstanding Memory and Aging Project, initiated in 1979.  The photo at right is of Mr. Leo Keshner, the longest-tenured participant in the Memory and Aging Project, receiving a certificate honoring his 31st annual visit this summer.

The two newly-published studies involve the behaviors of the tau protein in mice in the first study, and a byproduct of brain activity called amyloid beta in humans in the second.

As published in the Journal of Neuroscience online (Sept. 14), WU researchers now know that the tau protein, which has been studied as a promising marker of Alzheimer's, not only exists inside the nerve cell but is secreted from the cells into the surrounding brain fluid throughout life in healthy mice.  Tau is the main ingredient of neurofibrillary tangles, which are abnormal clumps of material inside nerve cells and a hallmark of the disease; increased tau in the spinal fluid also appears to be a sign of early Alzheimer’s disease.

Lead author of the tau brain fluid study, Kaoru Yamada, PhD, a postdoctoral researcher in the laboratory of Dr. David Holtzman, describes the significance of their findings this way:

“Our new technique for measuring tau in the living brains of animal models has the potential to help us determine how it is secreted, which could be very important to fully understanding the Alzheimer’s disease process.  It’s also going to help us test new drugs for Alzheimer’s.”

In the amyloid beta study, published online in the Archives of Neurology, researchers discovered that the amyloid beta marker rises in spinal fluid during the day and falls with sleep, reinforcing a link between increased Alzheimer’s risk and inadequate sleep. The brain’s relative inactivity during sleep may provide an opportunity to finish clearing away the amyloid beta from the brain through the spinal fluid.

According to Dr. Stephen Duntley, professor of neurology and director of Washington University's Sleep Medicine Center:

“It’s still speculation, but there are tantalizing hints that better sleep may be helpful in reducing Alzheimer’s disease risk. We know from a number of studies that exercise enhances sleep, and research also has shown that exercise is associated with decreased risk of Alzheimer’s. Sleep might be one link through which that effect occurs.”

On March 8, 2012, Biotechnology Calendar, Inc. will hold our 9th Annual St Louis BioResearch Product Faire on the Washington University campus.  If you are a life science laboratory supplier, service provider, or potential exhibitor, we invite you to click below for information and funding stats:

Biotechnology Calendar, Inc. is a full-service event marketing and planning company producing on-campus life science research tradeshows nationwide for the past 18 years. We plan and promote each event to bring the best products and services to the best research campuses across the country. Life science researchers, purchasing agents, and lab managers are actively invited to attend to see the latest products and equipment and discuss their laboratory tool and service needs.  See our nationwide show schedule for 2011 and 2012.