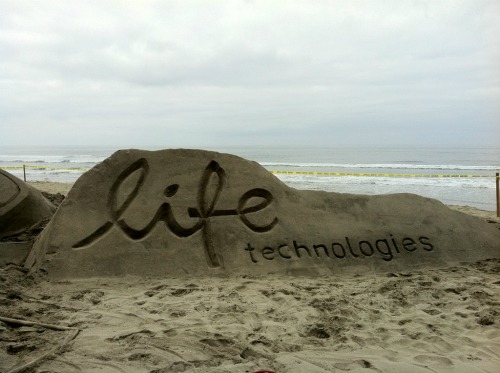 Moore's Law predicting the exponential growth rate of transistor capacity every two years may have to be reconsidered in light of the progress being made by Life Technologies Corporation and scientists around the globe who have taken up the Life Tech Grand Challenges to double the scalability, speed and accuracy of its Ion Torrent Personal Genome Machine (PGM) Sequencer.  The competition was initiated in January as "a first-of-its-kind crowdsourcing initiative in the life sciences tools and technology industry," with a prize of $1M in each category of performance enhancement.  The goal is to double the company's best test rates, which are themselves rapidly improving in the course of the challenge, the result of an Olympian race between internal (company) and external researchers.

“True innovation comes from a collection of incentivized, curious scientists ripping apart the methods of others and making their own contribution to history. The Grand Challenges provide all scientists the opportunity to contribute directly to semiconductor sequencing and its potential impact on human health.”

Though the Grand Challenges close on September 15, 2011, mid-way benchmarks are truly remarkable and have already led to the next generation of semiconductor chip, the Ion 316, described in this recent Life Tech video:

Sr. Director of Marketing for Ion Torrent and video narrator, Andy Felton, describes a 10-fold improvement in output from the 314 chip in January to the 316 in July.  This means a sequencing workflow time of only 9 hours (or less than 8 hours for a short read).  With its simple chemistry and instrumentation, and a price tag of just under $50K, it's not surprising that the Ion Torrent PGM is the fastest-selling next generation sequencer on the market.  $3M in prize money (if outside researchers win the Grand Challenges) begins to look like a bargain.

Life Technologies was created by the merger of Invitrogen Corporation and Applied Biosystems Inc. in November of 2008.  The company is headquartered in Carlsbad, California, just north of San Diego.  The photo above is from the 2011 Beach Festival sponsored by Life Tech.  The festival promotes good beach stewardship, proving that a company can be cutting-edge and earth-friendly at the same time.

If you too are a laboratory equipment supplier in the San Diego life science market, make sure you're at the table when biomedical and other laboratory researchers come to the San Diego Biotechnology Vendor Showcase™ Exposition on August 25.  Biotechnology Calendar Inc. hosts this very successful event (now in its 18th year) twice annually on the UCSD campus.  With marketing, advertising opportunities, catering, seminars, shuttle transportation to and from other research facilities, and attendance by registration only, this is the premier industry event in San Diego.  For more info, click the button below.

If you are a researcher in the San Diego life science community and would like to attend this event, we welcome you and invite you to register here.