A Georgetown University study published in the journal JAMA Pediatrics says that there is a great deal of evidence that suggests that probiotics should be used to protect prematurely born infants from a dangerous and often deadly disease. Dr. Dan Merenstein of Georgetown University was the study’s senior author. The nearly half-million babies born prematurely every year in the U.S. are at risk of developing necrotizing enterocolitis (NEC), which affects the gastrointestinal tract by infecting it and destroying the bowel. According to the Georgetown website, the Georgetown University researchers believe that probiotics, a useful bacteria type, can help protect the intestinal tract and should be used with all premature babies with NEC.

Scientists at Georgetown University conducted a study published in Human Molecular Genetics that gives insight into a groundbreaking new strategy for treating neurodegenerative diseases featuring an unusual buildup of proteins, such as Alzheimer’s disease, Parkinson’s, frontotemporal dementia, amyotrophic lateral sclerosis, Huntington disease and Lew body dementia, to name a few. According to a Georgetown University news article, the researchers found that when the drug nilotinib is used to treat chronic myelogenous leukemia, it causes cancer cells to go into autophagy, a biological process that causes the death of cancerous tumor cells. 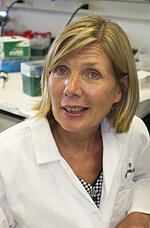 Traditionally, the only kind of conference with the steam to get a lot of people really worked up and to make headlines has been the sports variety, as in "Buffalo embarrasses Washington for critical conference win" or "Big East releases 2012 conference schedule."  But a scientific conference  with 1000 participants and hundreds of simulcasts by teaching hospitals, medical schools, research institutions, university life science departments, state and federal government agencies, health-oriented corporations and nonprofits across the nation?  Welcome to TEDMED 2012, coming to Washington DC (and a big screen near you) this April 10-13, and generating a lot of buzz in its advance wake.