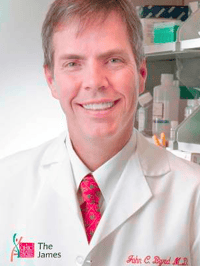 Dr. John Byrd was disappointed to find that his leukemia cell samples were becoming resistant to the anti-cancer drug he had been treating them with. He noticed that the cells were not actually resisting the drug but in fact pumping it back out before it reached its critical target. In an effort to evade the pumps, Byrd folded up the drugs in DNA using a process known as "DNA origami." The cell doesn’t recognize the intruder as dangerous until it releases the drugs in the heart of the cell, by which time it is too late.

“Cancer cells have novel ways of resisting drugs, like these pumps, and the exciting part of packaging the drug this way is that we can circumvent those defenses so that the drug accumulates in the cancer cell and causes it to die,” says Dr. Byrd in the OSU article highlighting the success of his discovery.

“Potentially, we can also tailor these structures to make them deliver drugs selectively to cancer cells and not to other parts of the body where they can cause side effects.”

Funding for the research came from start-up funds provided by the Department of Mechanical and Aerospace Engineering, the Leukemia and Lymphoma Society, the National Cancer Institute, the D. Warren Brown Foundation, Four Winds Foundation and the Harry T. Mangurian Jr. Foundation. For more details on funding for research at Ohio State University, peruse our Ohio State University Funding Report:

If you are a researcher or laboratory supplier in or near Ohio, and would like to boost awareness of your products and increase scientific sales, plan to attend Biotechnology Calendar, Inc.'s next Columbus BioResearch Product Faire™. This event is held annually on the Ohio State University campus and will happen this fall on October 6, 2016. We’ll also be holding our Cincinnati BioResearch Product Faire™ the next day, October 7, 2016. Biotechnology Calendar, Inc. has been bringing life science research trade shows to top research campuses for 20 years now. For more information about our Columbus show, please click the link above. If you’d like to attend a show closer to home, please see our 2016 schedule of events.