Though we love the protection it gives us from unwanted bacteria and viruses, our immune system can be too belligerent for its own good. Such is too often the case in biotechnology, when researchers develop a new treatment for disease, only to find out that the human immune system will attack and destroy it before any treatment occurs. Now a team at the University of Illinois, Urbana-Champaign has developed a surprisingly cost-effective method for sneaking past aggressive antibodies.

There do exist some methods for drug-laden particles to evade the immune system. For instance, a University of Pennsylvania study two years ago showed that attaching a protein “passport” to particles tricked antibodies into thinking the particles were already part of the host body.

However, methods like this are very costly, and UIUC bioengineering professor Dipanjan Pan believes there is a simpler way. He and his team tried to take advantage of the fact that the immune system fails to detect anything smaller than 10 nanometers. For perspective, a human hair is around 80,000 nanometers thick, so making particles this small is no mean feat. But Pan has found an incredibly cheap way to make particles that are sufficiently tiny.

“If you have a microwave and honey or molasses, you can pretty much make these particles at home,” Pan says in a recent UIUC article. “You just mix them together and cook it for a few minutes, and you get something that looks like char, but that is nanoparticles with high luminescence. This is one of the simplest systems that we can think of. It is safe and highly scalable for eventual clinical use.”

Despite the size of these nanoparticles, Pan still has incredible control over when and where they deliver their treatment. For instance, his team has developed one type of particle that only releases its load when it reaches body temperature. They are now working on particles that can sense when they’re inside a tumor and deliver anti-cancer drugs at the precisely correct moment.

“By using defined surface chemistry, we can change the properties of these particles,” Pan explains. “We can make them glow at a certain wavelength and also we can tune them to release the drugs in the presence of the cellular environment. That is, I think, the beauty of the work.” 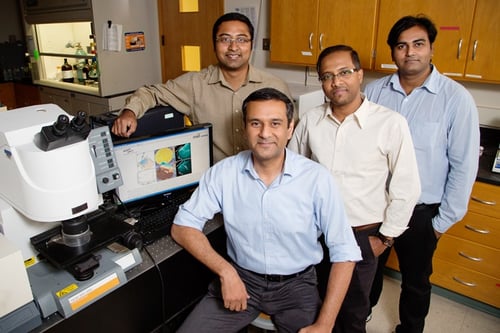