The NIH and several other organizations have granted money to OHSU for the development of optical coherence tomography (OCT) angiography, a technology which will be used in the management of diseases that lead to blindness, including diabetes, glaucoma, and macular degeneration.

“This is a significant breakthrough technology that could fundamentally change the way ophthalmologists diagnose and care for patients with retinal vascular diseases that cause blindness,” said David Wilson, M.D., Director of the OHSU Casey Eye Institute and Chair of the Department of Ophthalmology in the OHSU School of Medicine. “It will also allow us to diagnose patients earlier, permitting more timely treatment to avoid irreversible loss of vision.” 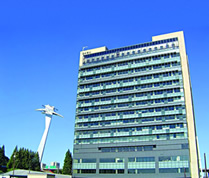 OHSU researchers Yali Jia, Ph.D., and David Huang, M.D., Ph.D. are credited with improving the quality of OCT angiography since it’s invention by using an algorithm called “split-spectrum amplitude-decorrelation angiography” (SSADA), and have filed patents to this end.

“We worked very hard to bring this new technology to clinical use only three years after its invention,” said Dr. Jia. “We are thrilled that its initial clinical demonstrations in a number of important eye diseases could be made public in a prestigious journal such as PNAS.”

“The new OCT angiography will be much less invasive for patients. As a result, it is ideal for screening patients for disease and routine checkups to see if treatments are working,” said Dr. Huang. “I believe this technology will be used much more frequently than conventional dye-based angiography because it is faster, better, safer and cheaper. This will also surely lead to better management of eye diseases.”

In addition to the over $3.3 million granted to OHSU by the NIH for the continued development of this important biotechnology, this research is supported by an unrestricted grant and career development award from Research to Prevent Blindness, and the German Research Foundation.

As one of the leading research institutions in the Northwest, OHSU is poised to spend million on the purchase of biotech and lab supplies for life science R&D in 2015.

Some recent funding statistics from OHSU: 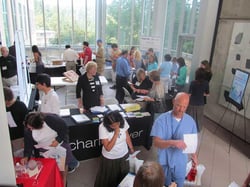 Lab supply vendors interested in promoting lab products directly to researchers in the OHSU marketplace can exhibit at this popular and industry-leading biotechnology event by clicking below: