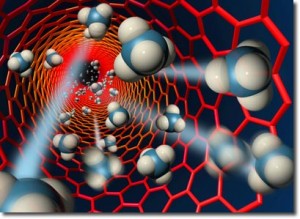 Pancreatic cancer is a devastating disease with a five-year survival rate of only 5 percent, and which often goes undiagnosed until treatment options have become extremely limited.

Scientists at UCLA’s California NanoSystems Institute and Jonsson Comprehensive Cancer Center are using nanotechnology to create a new treatment that may solve some of the problems of using chemotherapy to treat pancreatic cancer.

A researcher team led by Dr. Huan Meng, assistant adjunct professor of medicine, and Dr. Andre Nel, distinguished professor of medicine, both at the Jonsson Cancer Center, have discovered an alternative treatment using a tiny capsule called a mesoporous silica nanoparticle. The capsule contains drugs shown to reduce pancreas tumors in mice as successfully as the current standard treatment, but at one-twelfth the dosage.

The drugs, called gemcitabine and paclitaxel, can improve the overall treatment effect while also reducing the overall cost of treatment.  Previous to this study, the two drugs were already part of treatment plans, but are more effective when combined in this new delivery method.

“The beauty of the silica nanoparticle technology is that gemcitabine and paclitaxel are placed together in one special lipid-coated nanoparticle at the exact ratio that makes them synergistic with one another when co-delivered at the cancer site, giving us the best possible outcome by using a single drug carrier,” Meng said. “This enables us to reduce the dose and maintain the combinatorial effect.”

According to a university press release, the mice that received the two drugs inside the nanoparticle, had pancreas tumors shrank dramatically compared with those in the other mice.

Similar comparisons were made with mouse models, in which the human tumors were surgically implanted into the mice’s abdomens in order to more closely emulate the natural point of origin of pancreatic tumors and provide a better parallel to the tumors in humans. In these experiments, the tumors in the mice receiving silica nanoparticles shrank more than the comparative controls. Also, metastasis, or tumor spread, to nearby organs was eradicated in these mice.

“Instead of just a laboratory proof-of-principle study of any cancer, we specifically attacked pancreatic cancer with a custom-designed nanocarrier,” said Nel, who is also associate director for research of the California NanoSystems Institute. “In our platform, the drugs are truly synergistic because we have control over drug mixing, allowing us to incorporate optimal ratios in our particles, making the relevance of our models very high and our results very strong.”

The University of California, Los Angeles is home to some of the nation’s most active and highly subsidized life science researchers. Every year, UCLA scientists make use of millions of dollars in research funding to advance important studies in the fields of cancer research, infectious disease, and dozens of other life science areas.

With 290 medical research centers and institutions, UCLA continues to be a pioneer and an innovator with its state-of-the-art research funding, facilities, and people.

If you’d like to increase your lab sales, consider targeting the UCLA marketplace at the 35th Semiannual Biotechnology Vendor Showcase™ Event at The University of California, Los Angeles (UCLA) on April 2, 2015.

Are you new to biotech vendor showcase events? No problem, consider the following tradeshow tip from the pro’s: 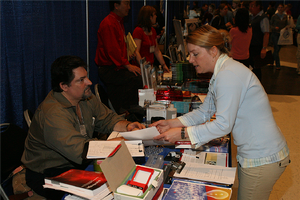 Bring your A-Team to tradeshows- As a lab supply company manager, you may be tempted to send your “b-team” to tradeshows as greeters and business card gatherers. However, Biotechnology Calendar Inc.’s shows are attended by some of the nation’s most prominent researchers who are likely to have many questions about how your biotech can help them advance their research.

Your booth should be staffed by people who know the industry, and their products, well enough to educate interested life science researchers. Not only does this convey a genuine sense of interest and knowledge to the consumer, but also maximizes potential for converting interested researchers into purchasers right at your booth.

No matter the quality of your products, your sales reps’ ability to answer questions and offer insight is the determining factor in filling orders right at the booth.