The summer is finally approaching, which means biotechnology news related to mosquito outbreaks is especially hot. (We had the same thought last summer; see Irvine Research Lab Produces Transgenic Mosquitoes to Combat Malaria and Rock Neurogenetics Lab in the Press for Mosquito Research, Fashion Scents.) As was the case last summer, researchers are working hard to reduce the impact of malaria, which is largely transmitted by mosquitoes. At Michigan State University, they are taking a unique approach to this old problem: instead of protecting humans from mosquitoes, just protect mosquitoes from malaria in the first place.

The starting point for such a feat is the bacteria Wolbachia, which resists the malaria parasite. The trick was giving the powers of this strain of bacteria to mosquitoes, which is where MSU microbiology professor Zhiyong Xi enters the scene. He identified a species of Wolbachia that can infect mosquitoes through embryonic injection. Thousands of mosquito embryos were injected with the bacteria until one female was successfully infected. If those odds don’t sound particularly impressive, consider that this female has produced 34 generations (and counting) of offspring with a one hundred percent infection frequency.

With a strain of malaria-resistant mosquitoes at the ready, Xi’s next step was to see how they reacted with other mosquitoes. As Xi reports in a recent MSU article, “We then seeded them into uninfected populations and repeatedly produced a population of predominantly Wolbachia-infected mosquitoes.” “Predominantly” is an understatement here- the entire test population was infected in eight generations or less for every test case the team ran.

Though Xi admits that the use of Wolbachia has been contemplated for years prior to this experiment, “Our work is the first to demonstrate Wolbachia can be stably established in a key malaria vector, the mosquito species Anopheles stephensi, which opens the door to use Wolbachia for malaria control.” If nothing else, the solidity and absoluteness of the lab’s results are rather impressive. 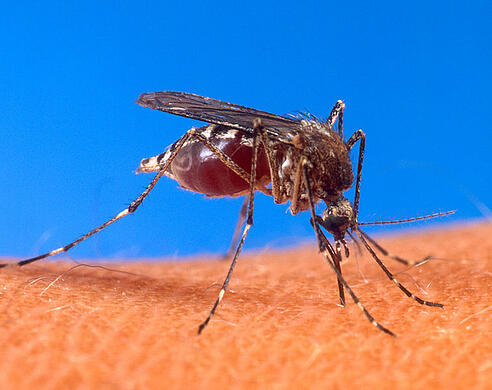 (Courtesy of Wikimedia Commons and the USDA)

In fact, the complete domination of the mosquito population by the bacteria means that there is a high chance that the application of Wolbachia will only have to happen once. This is valuable from an economic standpoint in opposition to the indefinite use of pesticide or human vaccines. It’s also environmentally valuable since it causes minimal disruption to the lives of mosquitoes and other animal life, which cannot be said for methods like pesticide. For these reasons, Xi’s work is being looked into by world health officials as a very viable way to combat malaria.

This MSU study was supported by three grants from the NIH in addition to a grant from the Global Health Initiative of the Bill & Melinda Gates foundation. For further research funding data specific to MSU, read our report using the link below:

Biotechnology Calendar, Inc. invites you to our East Lansing BioResearch Product Faire™ on July 18, 2013. It’s hosted right on the Michigan State campus is only a month away. This event provides an excellent opportunity to network with researchers and laboratory suppliers. Biotechnology Calendar, Inc. is a full-service event marketing and planning company producing on-campus life science research tradeshows nationwide for going 20 years. If you’d like to attend this show, please click the button below. If you’d like to attend one of our other nationwide shows, have a look at our 2013 schedule.