One of the reasons cancer is so successful and difficult to treat is that it uses the body's own systems to proliferate, thrive, and hide from attack. Bioresearch scientists out to target cancer are taking a similar approach, building tiny bio-vehicles for locating tumors that reach their destination without setting off a massive immune system alarm or flooding the whole body with toxic chemicals. A team of biochemists at the University of California San Diego led by Dr. Nathan Gianneschi has developed a nanoparticle that assumes a benign shape to travel covertly through the blood system, then, recognizing a tumor, reassembles via an enzymatic cue into a net to attach itself to the cancerous target. 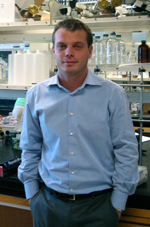 In an article recently published in the journal Advanced Materials, the Gianneschi Group researchers describe their targeting strategy. Certain types of cancers (like fibrosarcomas) produce a class of enzymes called matrix metalloproteinases (MMPs), which cause proteins to reconfigure and the cancer to metastasize. (They can also allert the immune system that something is not right.) The UCSD team, which included scientists from the School of Medicine’s Department of Radiology, built a nanoparticle that is attracted to the MMP enzymes specifically and knows to self-reassemble when it finds them at the cancer site.

According to Gianneschi (photo right), from a UCSD press release:

“We wanted to come up with a new approach,” Gianneschi said. “Specifically, we wanted to design switchable materials that we could inject in one shape and have them change to another between the blood and tumors.”

One of the challenges of treating cancer is getting enough medicine to the diseased tissue and keeping it there long enough to do its job of eradication. The problem is that the body tends to send up the alarm when it senses a host of foreign molecules (in this case drugs) floating in the blood stream. The shapeshifting nanoparticles developed by the UCSD research team not only go undetected due to their size and shape, but they can be engineered to carry within them either a drug compound or a "flag" to allert radiologists to the precise location of the tumor. In lab experiments, a fluorecent dye was inserted in the nanoparticles which then became visible as the tiny vehicles reassembled into nets, opening up and latching onto their target. The nanoparticles functioned in this case as locator probes.

In addition to Dr. Gianneschi, co-authors of the recent study include Miao-Ping Chen, Matthew Thompson, Christopher Barbak and David Hall. Funding support was provided by the NIH, the Army Research Office, and the Air Force Office of Scientific Research. Gianneschi also received a New Faculty Award from the Henry and Camille Dreyfus Foundation and a Research Fellowship from the Alfred P. Sloan Foundation.

An earlier blog of ours, UCSD Research Lab Invents Biomimetic Nanosponge Disguised as Red Blood Cell, explored a related nanoparticle technology for drug delivery developed by the the Zhang Lab at UCSD. 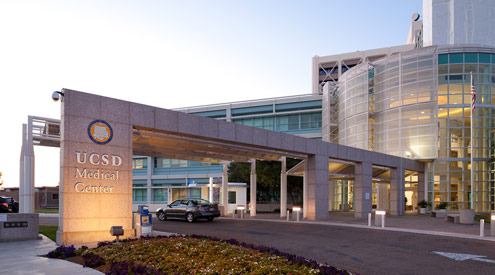 Biotechnology Calendar, Inc. started more than 20 years ago at UCSD and still holds its epic San Diego Biotechnology Vendor Showcase™ events twice-annually on the La Jolla campus.  The date for our next show is August 22nd, 2013.  We actively invite laboratory researchers from across the San Diego life science community to attend and see the latest in equipment technology, enjoy a great buffet meal, and chat with suppliers from the top companies locally and across the United States about their lab needs.

For more information on exhibiting, or to get a free funding report on UCSD bioscience, click the button below: