Drs. Arnold R. Kriegstein and Arturo Alvarez-Buylla head the neural pipeline of the UCSF stem cell center and are co-authors (with others) on the two scientific papers just published, in the May issues of Cell Stem Cell and Nature Neuroscience. In the more directly therapeutic study with epileptic mice, the team found that seizures stopped altogether in about half of the mice and were dramatically reduced in the rest. Furthermore, after only one treatment, the results were permanent. This differs markedly from other epilepsy drug treatments, which must be administered continuously and lifelong. To further test the cells' potential, the research mice were afflicted with a particularly drug-resistant form of epilepsy, which was largely cured after the injection. In an earlier cell therapy experiment at UCSF, an injection of the cultured MGE cells into a damaged mouse spinal cord significantly reduced pain.

While all of these experiments with the MGE cells demonstrated that the cells successfully integrated into the mouse brain and subsequently carried out their regulatory function, there were other benefits to the research as well. What these scientists and their colleagues learned about MGE cells' development-- namely that they require a lot of time to grow and that they correctly mimic human neural development-- makes the cells valuable for creating laboratory models of human brain diseases in which interneurons malfunction. 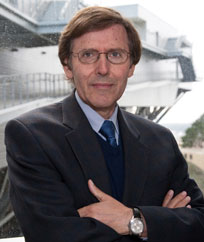 [Arnold Kriegstein, MD, PhD, in front of the Ray and Dagmar Dolby stem cell research building on the Parnassus Campus, courtesy of UCSF]

The lead up to this research targeting interneurons was also extremely valuable, as it required culturing the MGE cell line from more general stem cells, both embryonic and induced pluripotent. Postdoctoral researcher Cory Nichols was a key figure in the process, which required the use of key growth hormones and other molecules to shape the developmental path. Given the promise of these human MGE cells and the potential for creating the cell line in quantities adequate for use in future clinical trials, Nichols, Kriegstein, Buylla, and their co-researcher John Rubenstein have formed Neurona Therapeutics and applied for a patent, “In Vitro Production of Medial Ganglionic Eminence Precursor Cells" to commercialize their success.

Biotechnology Calendar Inc. holds its popular and well-attended San Francisco Biotechnology Vendor Showcase exhibition twice-annually: once a year at the Parnassus Campus and once at the newer Mission Bay Campus. The first showcase event of 2013 was held at Mission Bay on February 6. The second event will be held on the Parnassus Campus June 6, 2013. For information on exhibiting and funding, click the button below or call one of our sales reps:

BCI is a full service event marketing and planning company producing on-campus, life science research tradeshows nationwide for over 20 years. We plan and promote each event to bring the best products and services to the best research campuses across the country. Visit our website for information about upcoming shows in your area and to register to exhibit or attend.