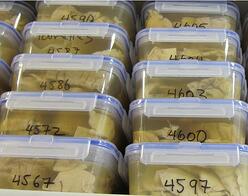 2012 was a rough year for two important biorepositories. In October, Hurricane Sandy wiped out power to New York University's main research building, leading to the loss of precious biological samples and hundreds of lab rodents. Earlier in the year, the Harvard University Brain Resource Center at McLean Hospital in Boston suffered a similar catastrophe when a freezer failure led to the compromise of 147 brain tissue samples. 54 of those were specifically for autism research, and the loss has been felt all over the country. As a recent episode of NPR's Morning Edition reported, post-mortem brain tissue samples from autism sufferers are in short supply already and have been for a long time. That autism research is able to make major advances in understanding the neurodisorder is especially impressive given the shortage of these samples. One such triumph has come out of the University of California San Diego's Autism Center of Excellence within the UCSD School of Medicine.

Dr. Eric Courchesne is a neuroscientist at UCSD and the director of the Autism Center there. He's been studying the developmental neurobiology underlying autism since 1990, with a focus on foundational neural defects. While his lab team looks at some autistic adults (such as Mr. Mitchell in the Morning Edition interview), his primary subject is the autistic brain in its earliest development, from 0-24 months and even pre-natally. The results of his research over the years have contributed substantially to what we know about the neural disorder. In recent years especially, Courchesne has discovered that while the older autistic brain may be undersized (on average), the early brain, specifically the prefrontal cortex which controls advanced brain function, is both enlarged and exhibits a marked excess of neurons.

[Dr. Eric Courchesne discusses his research at the Autism Center for Excellence, 2011.]

While cobbling together enough brain tissue samples from difference sources to explore brain size and do a complicated neuron count took many years, the results of those studies have since generated even more detailed findings. For instance, though the prefrontal cortex exhibits a 67% increase in neurons in the developing autistic brain, there is also a non-uniform number of neurons across other areas of the brain. The autistic brain grows too large too fast, and that excess leads to miswiring problems, especially in the region controlling social development, emotions, communication, and reason -- all common symptoms of autistic behavior.

What is perhaps most startling about this research is that all the neurons that we will ever grow appear by the end of the 2nd trimester of gestation. That means autism begins prenatally. Moreover, in the 3rd trimester the brain goes through a process of apoptosis where it hones down the number of neurons to the level we have for more or less the rest of our lives. So, the autistic brain may either generate too many neurons to begin with, or it may fail to whittle down that number normally. Either way, it means there is a failure of proper maturation in utero that effects not only the number of neurons, but overall brain circuitry and connectivity.

When Courchesne and his colleagues went on to look for the ways that the genetic pathways are disordered as a result (or more likely cause) of autism, they found 102 differently expressed genes in the autistic child. There was a widespread dysregulation of the pathways governing cell numbers and functional integrity. Defects were expressed in processes such as:

To watch a longer video of Courchesne giving a very recent (and very interesting) lecture as part of the CARTA series, on which much of this blog is based, follow this link.

Dr. Courchesne's research is currently funded by various NIH agencies at over $2M, with renewal grants to begin this year. 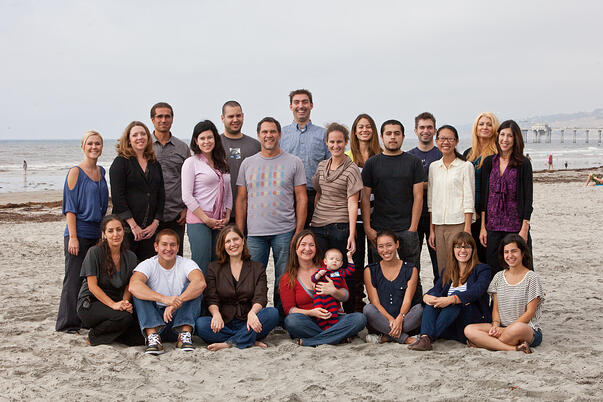 [UCSD Autism Center of Excellence team, courtesy of their website]

Biotechnology Calendar, Inc. was founded over 20 years ago to bring scientific events and new technologies to life science researchers at UCSD. Now a nationwide science tradeshow and marketing company, we still hold our popular flagship San Diego Biotechnology Vendor Showcase™ event twice annually on the UCSD campus, with investigators attending from across the life science community, including affiliate institutions like Scripps Research and the Salk Institute.

Our next Biotechnology Vendor Showcase™ Expo will take place February 14, 2013, with a 2nd event on August 22, 2013. For information on exhibiting and to receive a free UCSD funding report, click the button below: