Cells are Under Control at University of Cincinnati

A technique that is becoming more and more widespread and useful in both modern medicine and biological research is that of cell manipulation. Instead of working purely on visible structures like organs and tissues, doctors and scientists have begun to focus in on how to sort, move, and alter the smallest building blocks of life: cells. While many techniques have been developed and accepted for these purposes, research at the University of Cincinnati has yielded a new method that may be both more efficient and inexpensive than anything seen thus far.

One way to manipulate cells is through laser trapping, in which a beam of light is used to keep a single cell in place. In the body, or really anywhere where the temperature is above absolute zero, cells are constantly in motion. Shining a laser on a cell exerts a very small force on the cell, which the cell reciprocates with what is known as the normal force. These two forces keep the cell in place. The most useful part of laser trapping, or “optical tweezers” as it is sometimes known, is that moving the laser while the cell is trapped brings the cell with it, allowing for complete two-dimensional movement. The largest downfall of this method is efficiency: moving each individual cell is slow going, and there are far too many cells in an organ or even a tissue to properly move or sort all of them in a reasonable amount of time. 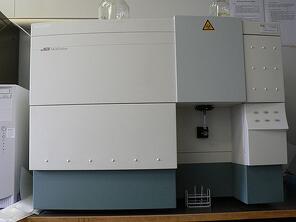 A more common method of cell manipulation is known as flow cytometry. According to invitrogen.com, flow cytometry sends thousands of cells through a laser scanner and then sorts them based on a given property. Obviously, since a laser is used to differentiate the cells, their differentiating characteristic must be based on the light the cells emit. In some cases, this is enough for an effective sort (as in a sort based on size or molecules present on the surface); in others certain cells are given a fluorescent marker to stand out from other cells. While effective and quite efficient, flow cytometers are large machines (pictured right, courtesy of Wikimedia Commons and Biol) and thus are rather expensive.

University of Cincinnati professor Chia-Chi Ho, who specializes in chemical and materials engineering, entered the ring of cell manipulation last year with the use of microarrays, more commonly known as lab-on-a-chip technology. As she said in a recent C&EN (Chemical and Engineering News) article, “We can use microarrays to amplify the natural direction of cells and guide their continuous migration along preset paths and directions.” To do this, she and her lab used a cell-resistant polymer sheet with teardrop-shaped unmodified islands on top of it. The islands weren’t cell-resistant and so directed the movement of the cells based on their natural speed. Speedier cells reached the end of the sheet despite obstruction by the islands, while the slower ones remained caught in the network of teardrops. 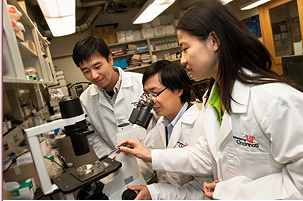 (Professor Ho, left, and her lab, courtesy of www.uc.edu)

Ho took this simple idea a bit further this year, using just a culture dish instead of a microarray to test the same principle. She stamped a honeycomb pattern with similar properties (cell-resistant background with unmodified bumps) on a culture dish and added two different types of cells. In 72 hours, the groups of cells had entirely separated on the dish. This process can even be sped up “either by modifying the shape of the teardrop structures and their spacing or by adding chemical attractants to the culture dish.” While this process could conceivably be used for the exciting prospect of growing organs from dishes, Ho has a more practical short-term view: to isolate diseased or cancerous cells from healthy ones.

Professor Ho’s research alone has garnered over $3 million in funding for the University of Cincinnati. In addition, the university received a $1.8 million grant this month for key growth areas such as biohealth and advanced manufacturing, similar to the research seen here. For more information about the University of Cincinnati’s funding and research growth, click on this button for a free UC funding report.

If you are a research scientist or lab supplier interested in networking with others in your field at University of Cincinnati, Biotechnology Calendar, Inc. invites you to attend our annual Cincinnati Bioresearch Product Faire™, held next on August 7th, 2013. Biotechnology Calendar, Inc. is a full-service science research marketing and events-planning company that hosts events at top research institutions nationwide. If you are interested in attending this show, please click the button below. Otherwise, we encourage you to check out our 2013 schedule for a more complete geographical selection.