Columbia's Manhattanville campus will house buildings for its schools of business and the arts and will allow for the construction of an exclusive neuroscience research bulding, the Jerome L. Greene Science Center, which is already going up.  The nine-story, 450,000sf building will have 60 laboratories where faculty and students will explore the relationships between gene function, brain wiring and behavior—research with vast implications for the treatment of brain illnesses and neurodegenerative diseases such as Parkinson’s and Alzheimer’s.  Scheduled to open in 2015, the Greene building will be home to the Mind Brain Behavior Initiative, which was launched formally in 2004. The building is the culmination of a vision of bringing brain scientists from across the University's schools and departments together in one place to map the next great field: that of thought and brain function. It's a bold and ambitious plan, which is reflected in the building's design.

There is a tendency to talk high-mindedly about how new collaborative science buildings create interactions and even alter behavior and productivity through their design. Columbia president Lee Bollinger remarks that Columbia has a history of creating spaces that inspire the mind, and that you think better and feel smarter in a well-designed built environment. In other words, all buildings devoted to creative intellectual and scientific thought should engage the brain, but especially this one, given that the brain is its subject. Watch the longish but very interesting video on the project below, which includes Bollinger's quote:

[The new Greene Science Center, courtesy of Columbia News via The Columbia Record]

Uptown a little further at the Columbia University Medical Center campus in Washington Heights, another new building design has just been announced: the Medical & Graduate Education Building on Haven Street between West 171st and West 172nd Streets. This location on the north side of the medical campus puts the structure next to the Howard Hughes Medical Institute and marks a commitment by CUMC to continuing to offer one of the best medical school educations in the world. At 14 stories, the building will be occupied by graduate students from all four CUMC schools (P&S, Nursing, Dental Medicine and the Mailman School of Public Health), as well as the biomedical departments of the Graduate School of Arts and Sciences. It will contain technologically advanced classrooms, collaboration spaces, and a modern simulation center. 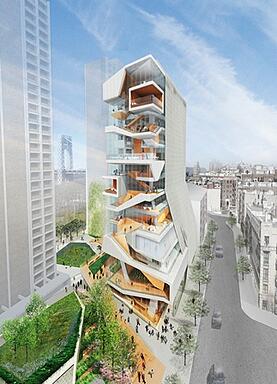 Aware that it will be not only a hive of human social and educational activity but a visual landmark both within the community and from a distance, the new Medical & Graduate Education Building will have two notable features:

According to the architectural firm that is designing the provocative building:

“The new Medical and Graduate Education Building will be the social and academic anchor of the CUMC campus.”

Graduate students from all of the CUMC schools were involved in the planning and design process.  Construction is expected to begin in early 2013 and will take an estimated 42 months to complete.

Biotechnology Calendar, Inc. is a science research marketing and event-planning company that organizes university tradeshows nationwide. If you are a science researcher or lab supplier interested in networking at Columbia University Medical Center, our 2nd Annual Columbia BioResearch Product Faire event will be held on Monday October 15, 2012. Our shows are catered, casually professional, and always enlightening.

In addition to our CUMC show, we hold three other events in New York in the fall:

See our full 2012 Nationwide Show Schedule for all other dates.