Medical Research Building at UW-Madison In a Three-Part Construction

Medical research building construction is underway at the University of Wisconsin-Madison with high hopes for top level research once the three stages of this project have all been completed. The goal for this project, which together will be called the Wisconsin Institutes for Medical Research (WIMR), "is to create a new kind of, almost revolutionary, model for how we do medical research," said Dr. Robert Golden, dean of the UW School of Medicine and Public Health.

Once WIMR is complete, there will be three large towers near each other, with each tower focusing on different research projects. The first tower, which opened in 2008, is devoted to many forms of cancer research and treatment, not to mention it also houses the headquarters for the UW Carbone Cancer Center. This center contains whole floors dedicated to prostate and breast cancer research, as well as pediatric and hematologic oncology. The third, fourth, and fifth floors alone are alloted to researchers studying cancer in children; cancers of the blood, lungs, head, and neck; as well as orthopedics, regenerative medicine, and surgery, respectively. This tower is also home to revolutionary programs involving imaging and radiation sciences, allowing for more flexibility in the treatment of patients. 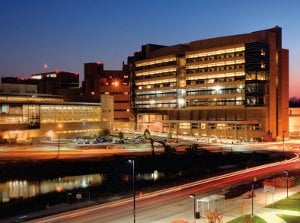 (The 1st tower, now in operation)

The next stage for this project is the completion of the $134.8 million, nine-story second tower, scheduled to be occupied and ready for research by November 2013. This tower will focus on researching cardiovascular medicine, neuroscience, and molecular based disease, programs currently located on the central campus at the Medical Sciences Center (MSC). The McArdle Laboratory for Cancer Research will also move into this tower, uniting 18 separate oncology department lab groups into one building, and two new departments will be added: neuroscience and cell and regenerative biology (which will replace the prior departments of anatomy, physiology, and pharmacology). In addition to these programs, there will also be an entire floor dedicated to a new Eye Research Institute.

As for the third tower, only preliminary discussions have taken place. Thoughts for what might occupy this tower have included the Wisconsin State Laboratory of Hygiene, currently on Henry Mall, and a $11 million autopsy and pathology suite that would be split between the second and third towers. Construction on this final addition to the research building project is set to begin in 2014. 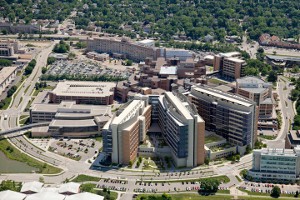 (An artist's rendering of what the final development will look like)

Together, these three towers will be home to around 1,700 researchers and lab workers collaborating from varying fields to study cancer, brain disorders, and heart disease, among other conditions. The majority of these researchers will be leaving the aging buildings and labs on the central UW Madison campus and upgrading to one of the most revolutionary building developments of our time.

If you are a Madison, Wisconsin researcher looking for new research equipment, or a research supplier who is interested in networking with researchers and supplying new science programs and building developments at UW-Madison, plan on attending Biotechnology Calendar, Inc.'s Bioresearch Product Faire™ in Madison on August 16th of this year, or you can find a show near you! See our 2012 nationwide show schedule