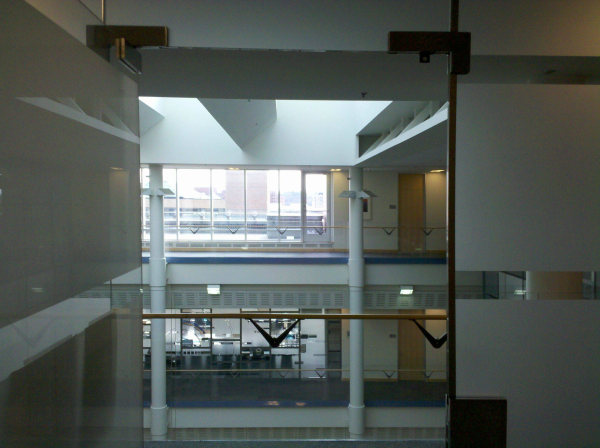 The photograph above was taken from inside the new Beyster CSE Building, from one researcher's office, looking across the atrium to the outside 4th floor patio where there is, or was briefly (in this photo) a large square object that looks suspiciously like...a hot tub?  Indeed.  Consider for a moment that the words "engineer" and "ingenuity" are in fact related, both traceable to the Latin word ingeniare, which means "to devise." What happened on the Ann Arbor North Campus was this: a group of ingenious engineering students took it upon themselves to devise a prank of sorts, whereby they installed a fully-functioning hot tub on the above patio in the middle of the night.  Two days later, after being much commented upon (and used), the installation disappeared as inexplicably as it had arrived.  All that remains is the tale, along with a few photos, including one of this plaque, which accompanied the hot tub in its brief life on the 4th Floor CSE patio:

[Plaque found with the hot tub, photo courtesy of AnnArbor.com]

The bubbler was not a gift of the Beysters, but they were reportedly amused by the episode, and probably accepted it as a form of homage, which the plaque suggests.  Now on that patch of patio is a lot of snow and the elegiac words on a printed note: “In Loving Memory, Gone but not Forgotten … Thou shall not mourn the loss, but rather remember the joy.”

There is a program broadcast on NPR cleverly titled “Engines of Our Ingenuity,” written and hosted by mechanical engineering professor John Lienhard, of the University of Houston.  In explaining why he talks about biology and poetry right along with steam engines and airplanes on his show, he offers this bit of linguistic history via literature:

Chaucer once said that our wisdom takes three forms. They are "memorie, engin, and intellect." By memorie and intellect he meant the same things we do. But by engin, he meant creative right-brain wit. He meant invention.

Just that sort of right-brain wit was on display last month at the Beyster Building.  Lienhard's broadened understanding of what it means to be an engineer seems apt right now too, when interdisciplinary research and collaboration between thinkers of all sorts is leading to genuine game-changing insights and technologies. Thanks to the Beysters' extreme generosity, many more engineering graduate students will have the opportunity to practice the art and science of invention at UM in the service of a better (and perhaps less solemn) world.

Biotechnology Calendar, Inc. will bring together life scientists and equipment suppliers in a cheerful forum for networking and knowledge-sharing on the Ann Arbor campus of the University of Michigan on July 11, 2012.  This will be our 12th annual Ann Arbor BioResearch Product Faire event, popular with hungry scientists and product vendors alike.  For more information on exhibiting, click the button below: