Acquiring the 28-building, 2.1 million sf former Pfizer complex on the north side of its Ann Arbor campus, renamed the North Campus Research Complex (NCRC), was a coup for the University of Michigan in 2009. (Read our earlier blog on the NCRC.) While some labs were filled quickly, planning, retrofitting, and moving into that much space doesn't happen overnight, so administrators developed a master plan for occupancy.  That timeline has the complex reaching capacity by the end of this year, 2012, and they are ahead of schedule.

There are currently about 1,000 employees working at the NCRC; there will be 1,700 by the year's end or sooner.  In a recent interview, Executive Director David Canter gives these numbers for lab researchers specifically:

“At the beginning of this month [January], if we take everybody in a lab-type role — faculty, researchers, start-up companies, private companies — we have about 300 people in labs, and we’ll expect…to have another one to two hundred more move in the next six months.”

100-200 lab research types taking up residence and outfitting their new space by summer means a lot of equipment in transit and on order.  The two fastest-filling entities are the Cardiovascular Center research labs and the Venture Accelerator labs.

Drs. Eric Devaney and Todd Herron (photo right), whose research focuses on the molecular biology of heart failure, were the first of about 60 researchers from U-M’s Cardiovascular Center who will move to the NCRC as part of a cardiovascular research cluster. Whereas their offices used to be on opposite sides of Ann Arbor, Devaney and Herron are now are able to work side by side, and soon alongside even more of their cardiac research colleagues.  The value of bringing scientists together, sometimes from the same field and other times from different research backgrounds, is foremost in the vision of the University's research planners, along with considerable expansion of UM's research capabilities overall.  While much of the NCRC lab space has been committed already, a certain portion is being left available for future research units, which take time to coordinate and realize.

UM's Tech Tranfer Venture Accelerator at the NCRC has been especially successful in putting researchers into new labs at the complex.  Providing a space where faculty invention can get its legs and learn to walk is a win for everyone.  Technology that can be developed in an incubator- like environment on campus is more likely to grow the local tech industry and keep profits and talent in Michigan than selling ideas to already-established giants that may abandon a community (like Pfizer did) when its plans change.

The most high-profile tenant at the NCRC to come out of UM talent is Lycera Corp., founded by chemistry professor Gary Glick in 2006.  The very successful drug development spinoff leased and moved into 14,000sf of NCRC lab space in 2011, as well as hiring a star CEO away from Merck to head its growth. 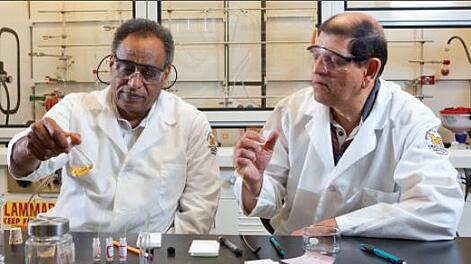 Check out our complete 2012 Event Schedule for shows nationwide.